Deakin researchers are working with colleagues at the University of Melbourne, Parks Victoria divers and volunteer citizen scientists to carry out the work, aimed at re-establishing kelp canopies in the bay.

The project was funded as part of a larger reef restoration project, led by the University of Melbourne and funded by the Department for Environment, Land, Water and Planning (DELWP) though the Port Phillip Bay Fund.

"Based upon data us and others had collected, in 2016 the Victorian Government's State of the Bays report identified that the overabundance of purple sea urchins in northern Port Phillip Bay was a significant issue," Dr Carnell said.

"We think that a decline in nutrient inputs into the bay during the millennium drought lead to less kelp and other seaweeds for the sea urchins to eat. Effectively, they got hungry and started eating almost all of the remaining kelp and seaweeds from these reefs."

Dr Carnell said kelp provided an important marine habitat and therefore made a better environment for fishing, snorkelling and diving.

"A loss of kelp forests results in a loss of species that rely on kelp for food and shelter. By restoring kelp cover we can return habitat essential to the juvenile and adult stages of many of Port Phillip Bay's marine animals, including economically important species such as abalone," he said.

University of Melbourne Research Fellow Dr Rebecca Morris, from the National Centre for Coasts and Climate, said the project aimed to establish how much people-power, time and money was needed to make a significant difference.

"Unfortunately, it takes 10 urchins to eat all the kelp in a square metre, but you only need two or three to stop that area of kelp from coming back," Dr Morris said.

"We have seen a shift in the balance of the reefs in the bay, and some areas seem unable to recover on their own, so they'll need a little help from us.

"That's why a culling program is needed. To make a difference in restoring some of this critical habitat, we need urchin numbers to be kept really low for at least two years."

Parks Victoria Ranger Emily Verey said 10 divers recently travelled out from the Parks Victoria jetty at Williamstown to carry out the first stage of the work.

"We are lucky to have engaged community groups who are willing to get involved with this trial program to tackle these marine pests head on," she said.

"We are focusing on Jawbone Marine Sanctuary and Point Cooke Marine Sanctuary for this trial. If it's successful, we will look at expanding this program so we can continue to protect our special marine habitat for future generations to enjoy." 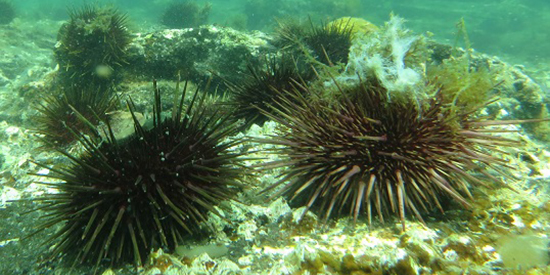