Dingoes could be the antidote to Australia's destructive red fox populations, but only if reintroduced to areas humans have removed them from, according to new international research published in Nature Communications.

Lead researcher Dr Thomas Newsome, from Deakin's Centre for Integrative Ecology in the School of Life and Environmental Sciences and the University of Sydney, said the new research showed fox numbers were reduced where dingoes were high in abundance, compared to areas where foxes existed alongside fewer dingoes.

"We know that apex predators can have benefits to ecosystems, but human modifications, like the widespread clearance of land for livestock grazing and cropping, are making that hard," he said.

"Humans have long been modifying landscapes and that has pushed dingoes out of their natural habitat, so if we want to harness the benefits of dingoes, we need to provide suitable areas for them to recolonise.

"Our research is the first to look at the effect of dingo distribution and abundance on fox numbers.

"It showed that while fox numbers were reduced in the centre of the dingo's geographic range, at the edges of the dingo's range the suppressive effect on foxes significantly declined.”

The research also looked at similar predator pairs in the US (wolves and coyotes) and in Europe (wolves and golden jackals) with like results.

"When wolves were removed from large areas of the US, deer numbers increased, which meant that plant populations declined, and bears suffered because their food source dwindled," Dr Newsome said.

"When wolves were reintroduced to Yellowstone National Park, it helped to shift the area back into relative balance.

"We want to know if our results can be extrapolated to other competing predators, or other species that strongly interact, but it requires studies at large spatial scales."

Dingoes are classified as apex predators due to their position at the top of the food chain, and can control fox numbers through direct predation - chasing and killing them - as well as through fear, which can alter foxes’ activity and feeding patterns.

Dr Newsome said foxes and cats were blamed for the extinction of at least 20 native mammals in Australia since their introduction following European settlement.

"Foxes and cats are killing many threatened small-medium sized mammal species - including bilbies and wallabies - and they also spread diseases and impact on agriculture," he said.

"Dingoes don't pose the same risk to these threatened species, as the smaller mammals have been able to develop effective anti-predator strategies to coexist with dingoes since they were introduced around 4,500 years ago.

"Unfortunately, our native mammals have not developed sufficient anti-predator strategies to coexist with foxes and cats - essentially making them sitting ducks."

Dr Newsome said the best way to help dingoes recolonise larger parts of Australia was to let them do it naturally.

"It's about changing the way we manage them. Dingoes are actively controlled throughout much of their range via baiting, trapping and shooting programmes, and exclusion fencing like the dingo fence prohibits dingo movements," he said.

"This research shows that apex predators like dingoes and wolves need large, continuous territories in order to effectively control the balance of their ecosystems.

"Humans need a greater tolerance of apex predators if we want to enjoy the environmental benefits they can provide." 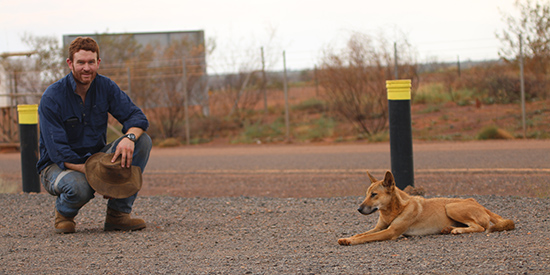