The only man on the mat: study finds yoga helps men's mental health

A new study by Deakin University has found significant mental and physical health benefits for men who practice yoga, but the biggest hurdle for many is having the courage to join a class.

Associate Professor Melissa O'Shea from Deakin's School of Psychology said yoga studios were often seen as women's spaces and some men found that intimidating and were embarrassed to exercise with women.

"Yoga combines breathing exercises, physical postures and meditation and has been shown to help with depression and anxiety but men represent less than 20 per cent of participants in Australian yoga classes," Associate Professor O'Shea said.

"We wanted to find out what was stopping more men taking up yoga, given the physical and mental health benefits of regular yoga practice."

Associate Professor O'Shea said separate research published last year revealed up to 25 per cent of Australian males, aged 10 to 55, have experienced a diagnosed mental health disorder in their lifetime.

"We know many more men struggle alone undiagnosed as they are less likely than women to seek mental health support and, when they do, the drop-out rates for men are as high as 44 per cent," Associate Professor O'Shea said.

"In our study we asked men who were engaged in a yoga practice, what mental health benefits, if any, they experienced as a result of their practice, but we also asked them what barriers they overcame when they considered taking up yoga."

"The men told us they felt like they were "the only man on the mat" or "it was a little intimidating the fact that there were a lot of people there, like young girls, super flexible and they all seemed to know what they were doing" or "I couldn't touch my toes…I was pretty embarrassed really"," Associate Professor O'Shea said.

"But joining a men's only class in Geelong was a turning point for a group of men who discovered a space where they felt motivated by each other's presence, enjoyed a sense of comradery and laughter and it felt "like a safe space for men".

"Eleven of the 14 participants in the study started practicing yoga after the age of 40. One participant said, "it really bothered me that I was getting old" and feeling increasingly "stiff and decrepit".

"The participants said they saw yoga as a form of physical activity they could maintain as they aged, and the low impact nature of yoga helped their physical health as well as ongoing mental health benefits.

"This study tells us yoga can be an effective means for men to self-manage their mental health. Increasing the availability of men's only yoga classes may be a great way of supporting men to step onto the mat for the first time," Associate Professor O'Shea said. 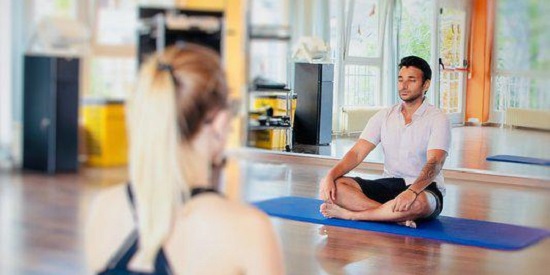