Victorian scientists are working to identify the pheromone that physiologically drives invasive sea stars to congregate en masse during mating, to help remove the pest from Australian marine areas and fisheries.

The exotic pests were first identified in 1995 in Australian waters and by 2000, their numbers were estimated to be around 165 million. A single female can produce between 5-20 million eggs annually.

"These sea stars are a threat to Australia's biosecurity and can destroy marine environments and cost our fishing industry by preying on commercially important species such as scallops and mussels," Minister Watt said.

"At the moment, sea stars are removed one by one, so any capture method that can aid in rapid and effective mass removal of the pests from waterways and fisheries is supported by the Albanese Government.

The ultimate aim of this work is to identify the chemical cues produced by the sea stars which triggers their mass congregation. Later stages of the project will consider the manufacture of the chemical to test it in traps."

The work is part of a project funded by the Australian Government's Department of Agriculture, Fisheries and Forestry under the Biosecurity Innovation Program, in collaboration with Agriculture Victoria.

Deakin University's EcoGeneticsLab Associate Professor Craig Sherman said similar work had been done to determine the pheromone triggering aggregation in other marine creatures, such as sea urchins and sea cucumbers.

"There has been a lot more research into using pheromone traps as a biosecurity management and control tool in terrestrial animals like feral goats and insects," he said. "This is a first for exotic, invasive marine pests in Australia.

We place the sea stars in tanks in a sterilised environment, recreating sea water by using distilled water with salt added. This triggers the sea stars to spawn, and we try and extract molecules to see if we can isolate the one that triggers the mating aggregation, by adding the isolated chemicals to the tanks and watching for simulated congregation behaviour."

Using a pheromone found in the parotoid of the adult toads, researchers were able to lure thousands of cane toad tadpoles into traps by coating a sugar cube-sized air stone lathered in the synthesised pheromone.

Victorian Minister for Agriculture Gayle Tierney said the Andrews Labor Government was proud to partner with the Commonwealth.

"We are working together to fight this significant marine pest," Minister Tierney said. "Joint, coordinated action on biosecurity is critical to protect industry and our precious coast, marine and land biosecurity."

"Managing pests in the marine environemnt is often difficult, so investigating a tool to control this species is an exciting prospect," he said. "While there is still some work to do, we look forward to seeing the results."

* Asterias amurensis (sea stars) is a nationally significant marine pest species listed on the Australian Priority Marine Pest List and as one of the International Union for Conservation of Nature Top 100 invasive species globally;

* Pheromone traps are an innovative technology used to manage pest species. They enable easier detection and can lure individuals into a smaller area making for more efficient and cost-effective eradication attempts;

* Both Victoria and Tasmania now have significant populations of Asterias amurensis;

* A recent outbreak of Asterias amurensis in China caused an estimated US$15.5 million damage to scallop, oyster and clam fisheries. 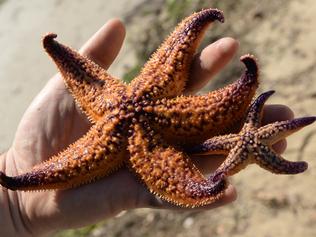