Thank you to Cliff for sharing his story in his own words...

Cliff Skinner (GCertArch ’99) had a difficult start in life. As a young boy he survived the horrific bombing attacks near London in World War 2. For a number of years, the area where he lived came under constant bombardment from high explosive bombs, incendiary bombs, deadly V1 and V2 rockets, straffing and shrapnel. A number of disabled aircraft were also brought down in his area too, causing widespread damage and loss of life.

In 1950 he came to Australia, penniless, with his schoolfriend and twenty other lads under the auspices of the Big Brother Youth Migration Movement and the Child Migration Scheme and started his working life as a farmhand in Tasmania. He worked on a dairy farm and enjoyed his time there.

He was subsequently conscripted into the first National Service Scheme in Australia during the early part of the Cold War period in 1952 and was not released from that obligation until 1957. For his military services, he was awarded The Australian Defence Medal and the Veterans badge.

Some years later he moved to Melbourne where he has remained ever since.

Cliff offered his services as an Honorary Welfare Officer for the Big Brother Movement and spent thirteen years assisting migrants on a voluntary capacity when they arrived in Melbourne.

Initially, on his own volition, he studied at the Royal Melbourne Institute of Technology, graduating in Property Economics, Valuations and Estate Management. He then attended The University of Melbourne, completing a Bachelor degree in Town and Regional Planning and a postgraduate diploma in the same discipline.

During his many years of study, he was granted a year’s leave of absence by his employer in 1975-76 to undertake research in The United Kingdom.

He was granted approval by The Graduate College of the University of Melbourne to commence PhD studies but was unable to continue, due to ill health, resulting from a serious road accident.

Later on, he completed a graduate course in Architecture at Deakin University. This qualification served him well in future years, particularly with his voluntary work.

He enjoyed a long career at senior level as a Property Valuer, Town Planning and Architectural Heritage Adviser and as an Expert Witness in Court proceedings.

After retirement, he offered his services to The Art Deco Society (Now the Art Deco and Modernism Society of Australia Inc) and served as their Honorary Architectural Heritage Adviser for approximately six years. For his voluntary services in helping to save, and to ensure the faithful restoration of a number of historic and iconic interwar buildings, he was awarded Life Membership of the Society.

He also served as the Honorary Architectural Heritage Adviser and Editor for the St Kilda Historical Society for five years.

In addition, he took on the role of Honorary Education Adviser on a sub-committee with the Royal Australian Town Planning Institute (now Planning Institute of Australia). He also contributed to arranging the Awards Events for Excellence in Town Planning. His education role entailed attending work expos, schools and colleges for year 12 students, advising them, their families and school vocational representatives on courses available and the opportunities available. In doing so, he assisted to elevate the status of the institute and attracted many more students to take up the profession. For his voluntary work he was elevated to Fellow status of the Institute.

Looking back on his career and his many years of voluntary service he says he wouldn’t change a thing. He enjoyed his time at the various universities and remembers some very fine lecturers. He said that graduating in multiple disciplines allowed him to enjoy a very varied career in his chosen profession.

Today, in his eighties, he still enjoys studying and he attends classes at the University of the Third Age and occasionally presenting lectures at Summer schools and service clubs. He also writes articles for various heritage and planning journals in Australia and overseas.

He and his wife, who is also a Deakin graduate, enjoy travelling overseas, especially as it gives them the opportunity to see some incredible architecture and remarkable town planning projects. They meet up with his professional associates in other countries.

He is very appreciative of the opportunities that Australia gave him to pursue his career and to the many people who encouraged him to do so. He remembers his university years as a time of great joy and fulfillment. 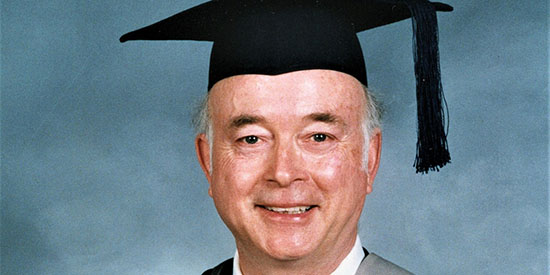