Cody Holloway was a bright and happy young woman full of curiosity about the world. At the age of 20 she was still trying to find her path in life and attending university was part of the plan. Tragically, Cody did not get to fulfil her dreams. On 2 December 2006 her life was cut short by a serial drunk driver.

“Cody was very special in many ways. She was always very caring even as a little girl and as she grew she expressed that in her concern for the environment and in how people were treated. We had many conversations about the plight of refugees and Indigenous Australians,” said her father Dennis Holloway.

“One of the things that played on my mind over the years was that Cody never got the chance to go to university. She had just completed a TAFE course to improve her ATAR score when she was killed. I felt that she was denied the chance to have an impact on the world,” said Dennis.

In 2017 Dennis and his wife Rosemary, Cody’s stepmother, decided to make a bequest and set up a scholarship in Cody’s name at Deakin University.

“As a Deakin graduate, I receive the alumni publications and was interested to learn about the work Deakin was doing to make Indigenous and refugee students comfortable in their learning environment. There was also information about bequests and the impact that they can have on students experiencing financial hardship.

“I put those two things together and suggested to Rosemary that we could leave Cody’s inheritance to Deakin as a bequest. We started the scholarship at the same time because we wanted to be able to provide some input into the gift.

“Our aim is to assist young Indigenous or refugee women whose lives would be improved by a tertiary education but who would not be able to carry the financial burden associated with university,” said Dennis.

Irene Bakulikira is the first recipient of the Cody Holloway Scholarship. She received assistance throughout her Bachelor of Arts and Master of Teaching (Secondary), which she completed this year.

Irene was born in the Democratic Republic of Congo. Her family fled their home because of war, then lived in Kenya for 10 years before coming to Australia in 2010. They settled in Geelong and Irene attended North Geelong Secondary College.

“I knew I wanted to be a teacher from a very young age, but I did not know how it was going to happen. Life in Kenya was difficult, it was a hand-to-mouth existence. Coming to Australia gave me the chance to finish high school and go to university.”

“My high school careers counsellors encouraged me to apply for scholarships because they knew that I needed the financial help. My dad was the only one working at the time, supporting a family of seven.

“I was very excited when I learned I had been successful. The scholarship covered all of my university costs and meant that I could concentrate on my studies.”

Last year, Irene had the opportunity to meet the couple who have had such an impact on her education. “It was really wonderful when I met Dennis and Rosemary face to face. They have helped me to achieve my dream and I am very grateful,” said Irene. She is currently applying for jobs to teach high school humanities and drama.

“It was such a pleasure to meet Irene. She is a very vivacious person who is passionate about what she wants to do in teaching and helping others learn. She has a bright future ahead of her,” said Rosemary.

Rosemary and Dennis chose to entrust Deakin with Cody’s legacy because of Dennis’ connection as an alumnus but also because of the university’s good reputation and profile in the community. They are happy with their decision and very impressed with the work that Deakin is doing.

“The experience so far has been very positive. Our contacts at Deakin have kept us in the loop with things related to the scholarship and have also embraced us into the university community. Quite an achievement considering we live in Sydney. This has generated a feeling of trust that makes us feel comfortable about how the bequest will be managed in the future,” said Rosemary.

“I think Cody would have approved of the bequest and she would have loved Irene. It has been very rewarding from that point of view. It helps us keep the memory of Cody alive as well as making us feel that she is still having an impact in the world. That is what we were thinking in terms of establishing this scholarship and leaving the bequest,” said Dennis.

“I hope that others will be inspired to support students and the university in a similar way.”

Through a partnership with Safewill, Deakin alumni can receive a 50% discount to make or update your Will online, until 28 February 2021. Learn more about Safewill. 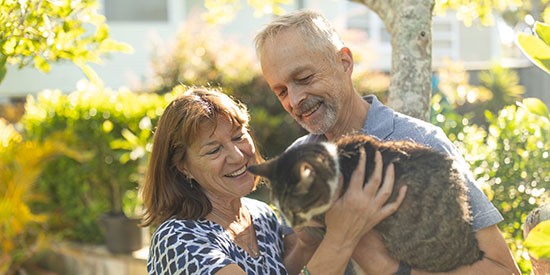