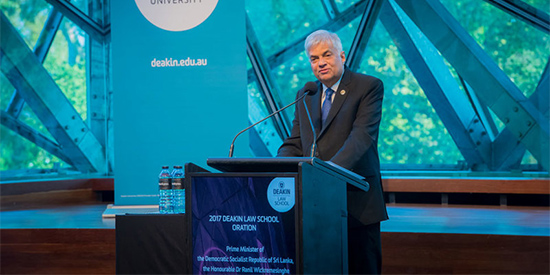 On the first official visit to Australia by a Sri Lankan Prime Minister in 60 years, Dr Wickremesinghe used the occasion to outline the legal, political and military complexities of Indian Ocean region and pledge his country’s willingness to take a leading role in the negotiation of a new agreement for greater security and trade.

Established by Deakin Law School (DLS), the annual Deakin Law Oration is typically delivered by a leading expert on a topic of relevance to the national and international legal community.

Dr Wickremesinghe said that as one of the world’s busiest and crucial trade corridors, the Indian Ocean was under growing pressure.

While the United Nations Convention on the Law of the Sea (UNCLOS) had introduced a stable system of maritime law for the region in the early 1980s, he explained that the global political order had undergone radical transformation since then and a new agreement was needed.

‘There are no longer two superpowers who underpin the UNCLOS. The bipolar Cold War period was superseded by the unipolar post-Cold War period, which in turn is today transforming itself into a multipolar world. This has resulted in a massive transition of economic and military power to Asia, within the Indian Ocean region and the Pacific … accordingly, the global political order, which produced UNCLOS, is radically different from the current global dynamics,’ he said.

‘All these have contributed to creating new uncertainties and tensions in the Indian Ocean … [with] new threats originating from non-traditional sources including the substantial increase of military and martial strength of the countries and parties in the region. This has altered the balance of power and the ability to uphold or enforce the UNCLOS,’ he said.

A key area of controversy continues to be the issue of military manoeuvres in the exclusive economic zone and Dr Wickremesinghe urged the need for consensus and balance.

He added that any agreement also needed to recognise the escalation in human smuggling, illicit drug trafficking and the relatively-new phenomenon of maritime terrorism.

‘We must remember, that the nature of terrorists’ activity has undergone far-reaching changes … which includes hijacking of commercial ships…UNCLOS does not have adequate provisions to address these issues.’

Finally, he added, a code on freedom of navigation in the Indian Ocean must include an effective – and realistic – dispute resolution process.

‘The new multipolar fast-paced global order has led to the increased involvement and influence of its many stakeholders in a given region, requiring regional consensus on any common concern,’ he said.

Highlighting Sri Lanka’s geographic vulnerability to any adverse Indian Ocean movements, Dr Wickremesinghe said that the island nation had already taken an important initiative in 1971 to propose the Indian Ocean as a ‘zone of peace’ to the UN General Assembly.

In-line with contemporary developments in a multipolar world, Sri Lanka is willing to initiate exploratory talks, Dr Wickremesinghe explained, by calling for a conference to agree on a stable legal order for the freedom of navigation.

‘The outcome of such a conference must be an agreement [incorporating a code of conduct] for Indian Ocean navigation. However, there are also other areas of significance that need to be taken into account … such as seabed mining, hydrographic surveying, fisheries, the environment, bio-prospecting and maritime research. These must also be treated in conformity with the principles of the freedom of navigation,’ he said.

‘Such a procedure will also enable the United States, which is not a member of UNCLOS, to participate and be a stakeholder in the final recommendations. Given that any agreement on the freedom of navigation in the Indian Ocean cannot succeed if any of the major players opt out. I have taken the opportunity of this oration to outline the way forward to build a consensus on these outstanding issues in the Indian Ocean. Our future lies in the Indian Ocean,’ he concluded.

Thanking Dr Wickremesinghe for his address, Dean of the Deakin Law School said the Indian Ocean region is perhaps the most significant geopolitical theatre of our times. He paid tribute to Sri Lanka’s maritime history from the early days of its civilization and noted the decline in Indian Ocean activity during colonial times. He also recognised the escalating tensions in the region with two dyads – India and China, and the US and China competing for dominance and posited that ‘the risks are so magnified and so unpredictable that they demand attention from us in a way that perhaps has never been the case in history. As the prime minister indicated, through the open challenge of creating this code and showing peace for this region and promoting prosperity for our people – in which both Deakin and Sri Lanka can partner – we’re all likely to inherit a better world and leave one that is even better for future generations.’ 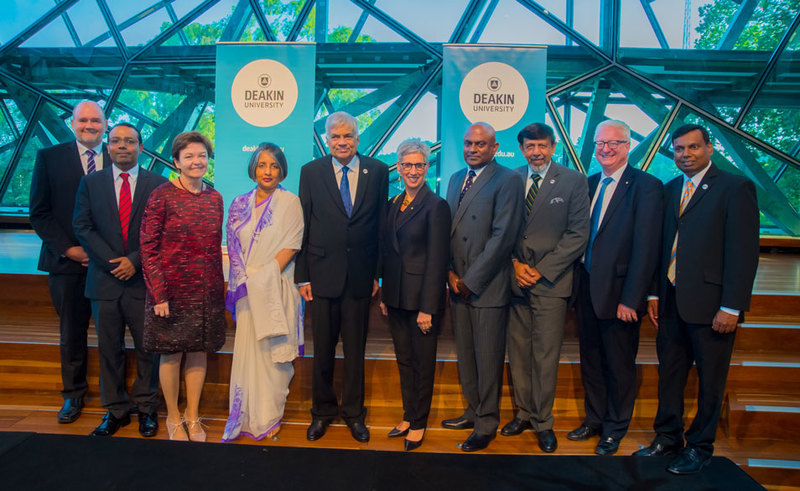 A former lawyer, Dr Wickremesinghe leads Sri Lanka’s United National Party (UNP) and is currently serving his fourth term as Prime Minister. During his Australian visit, Dr Wickremesinghe was awarded an honorary doctorate in law from Deakin University in recognition of his contribution to economic development, education and human rights.