Study to look at role of seaweed in climate change mitigation

Originally from Indonesia, Erlania started studying in Warrnambool in July and aims to show the role of seaweed in removing carbon dioxide from the atmosphere.

The research involves biomarker development usinge-DNA and compound-specific isotopesfor tracking seaweed contribution to carbon sequestration. It will also investigatehow much carbon from seaweed gets buried and how long it stays buried under the ocean sediment before escaping back into the atmosphere.

“This can prove the important role of seaweed in carbon sequestration,” Erlania said.

Erlania previously finished her Masters in Aquaculture Science at Bogor Agricultural University, Indonesia in 2013 and worked as a researcher at the Centre for Fisheries Research, mostly examining seaweed’s role in carbon capture and storage, as well as climate change mitigation.

“Climate change has broad impacts on the environment, causing issues in almost all sectors, including aquaculture, which results in economic difficulties for communities,” she said.

“Doing research on this international issue feels like I’m making a useful contribution to the world through science. Much work is still needed to examinedisclose the capability of seaweed for carbon sequestration to resolve climate change issues.”

Erlania said that human demand for seaweed  was rising while wild seaweed population was reducing.

Erlania said that in some developing countries, the role of seaweed in climate change mitigation had not been investigated.

“Even in my country, terestrial plants like forests are the most popular carbon sequestration agent considered for climate change mitigation,” she said.

“I expect my work can promote the important role of seaweed, particularly seaweed aquaculture, for the environment, not only in Indonesia but also on international seaweed networks and forums.”

Erlania came to Warnambool through an Australia Awards Scholarship, funded by the Department of Foreign Affairs and Trade for people from developing countries. Her PhD is being supervised byDr Alecia Bellgrove.

“I came to Australia for the opportunity to work with the experts here and I had heard Australia has a good education system,” she said.

“I chose Deakin by comparing the availability of experts and I was lucky to find Alecia who was a perfect fit with my research interest.”

Erlania said moving to a small rural city had been a pleasant surprise.

“I really love living here with the beautiful places, and while it’s a small campus thepeople are very friendly.” 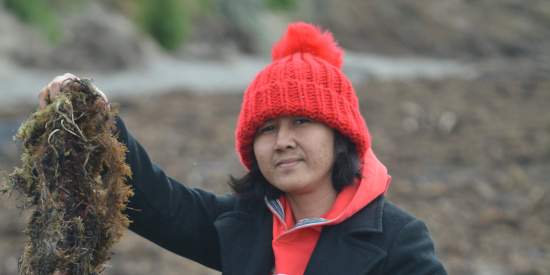