Scientists are racing against time to save Victoria’s unique Baw Baw frog - facing extinction from a fungus threatening a third of Australia’s frog species.

The Baw Baw frog (Philoria frosti) might be the colour of mud and have an unusual croak, but it is a very special Victorian frog, claim two Deakin University researchers who are seeking ways to save the critically-endangered amphibian.

PhD student Thomas Burns and his supervisor Professor Don Driscoll, Director of Deakin’s Centre for Integrative Ecology, are spending many hours traversing the Baw Baw area in the Victorian Alps. They are seeking to identify low-risk areas for potential reintroduction of the frogs, which have been decimated by chytridiomycosis, a disease caused by amphibian chytrid fungus, which has been responsible for amphibian declines around the world since the 1970s.

Scientists are unsure where the fungus originated, but it seems likely that humans helped it spread. For example, African clawed frogs (Xenopus laevis), a non-susceptible chytrid fungus host, were transported around the world as the main source of pregnancy testing globally from the 1940s to the 1960s. Injected with a woman’s urine, these frogs produce millimetre-sized, black-and-white eggs after five to 12 hours if the woman is pregnant – and were the most reliable pregnancy test for almost 20 years.

“Frogs are part of our natural heritage,” Professor Driscoll said. “They play a valuable role in ecosystems and help to make Australia distinctive. In a healthy ecosystem, amphibians can be one of the most abundant vertebrates. Losing them will cause broader changes in our ecosystems. We would have less snakes, less birds and less small mammals – and less diversity in the water.”

Most people are unaware that one third of the world’s amphibian species are under threat from a range of causes. These include: chytrid fungus, habitat loss/change, pollution, disease, exploitation and climate change. The scientists noted that one of the main concerns with chytrid is that it is able to cause declines in populations living in pristine habitat (absent of any other threat) and that these declines can happen very swiftly, with no obvious solution.

When the Baw Baw plateau was surveyed in the 1980s, researchers found 1000s of Baw Baw frogs in frost hollows across the plateau. Ten years later, only two per cent of this population remained.

“There are only a few hundred left in the wild and with their consistent downwards trajectory, they are expected to be extinct in the wild within five years,” Professor Driscoll explained.

The Baw Baw frog is Victoria’s only endemic frog, which lives exclusively on the Mt Baw Baw plateau and whose closest relatives (distant cousin) can be found in parts of Northern NSW.

“Baw Baw frogs have a really interesting life cycle," explained Professor Driscoll. "They live under the snow in winter and are more active than most other frogs in colder months. They lay their eggs after the snow has melted in mossy nests or other crevices, sometimes up to a metre below the surface among rocks. The females make a foam nest as they lay the eggs by hand-balling bubbles of air into the jelly mass as it is laid. Unlike most frog species, the developing tadpoles don’t swim or feed, but are nourished by a yolk sac; they are the only species in Victoria that does this.”

Mr Burns, who travelled to Deakin from Glasgow to undertake his PhD, has studied frogs in Scotland and the Caribbean. He is fascinated with Australia’s frogs and the prospect of finding ways to protect them.

“The main aim of my project is to examine the dynamics of the fungal pathogen within the species’ current and historic range, to determine how chytrid risk varies across the landscape and to identify factors which may influence this,” Mr Burns said.

“We hope that this information may prove useful for identifying locations to trial the reintroduction of Baw Baw frogs raised within captivity at Zoos Victoria or the Amphibian Research Centre in Werribee.”

The Baw Baw frog is fortunate to have received substantial attention in terms of conservation and research. It is included within Zoos Victoria’s 'Fighting Extinction' program as one of 21 priority Critical Species.

Six more Australian frogs are at immediate risk of extinction at the hands of chytrid fungus: the iconic Corroboree frogs (both southern and northern species), the spotted tree frog, Kroombit tinker frog, armoured mist frog and the Tasmanian tree frog. Another 22 are at moderate to low risk. 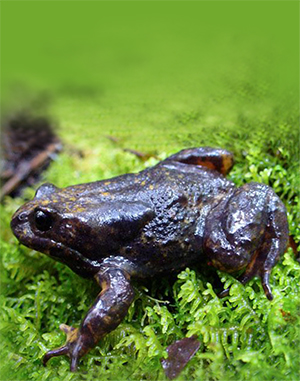 When the Baw Baw plateau was surveyed in the 1980s, researchers found 1000s of Baw Baw frogs in frost hollows across the plateau. Ten years later, only two per cent of this population remained. Photo courtesy, Damian Goodall, Zoos Victoria.