CISR’s haptically-enabled firefighting system has been showcased at the world's largest simulation conference.

"The FlAim Trainer can accurately represent heat, jet reaction and step-up forces, along with sound and visuals, to immerse a trainee in a real house, car, boat or aircraft fire,” said Professor Nahavandi, who is currently on a two-month sabbatical at Harvard University.

“We were delighted that the system attracted such strong interest at the conference.”

The FlAim Trainer was the result of a large team effort, with a number of other CISR researchers working on its development over the past six months, including Dr Mick Fielding, Dr Lei Wei, Mr Sameer Deshpande, Dr Matthew Watson and Dr Asim Bhatti.

The FlAim Trainer provides firefighting trainees with realistic training scenarios in a safe synthetic environment, improving preparation before live fire training is undertaken. CISR researchers particularly worked on the haptic (force feedback) aspect of the technology, which represents the “kick back” of water pressure, and the augmented reality software, which allows trainees to use the program in any location.

“The FlAim Trainer can use augmented reality markers to superimpose flames within any environment, such as from within the engine room of a ship,” said Dr Nelson.

“This means that the user can gain firefighting experience in the location where they are most likely to be confronted with it - and it allows trainees to keep learning within different types of environments.”

The system includes a high-end laptop, an Oculus Rift virtual reality headset and a Havoc software game engine. It was developed for users such as the US and Australian Defence Departments, the nuclear industry and fire fighters.

Attended by around 14,000 registrants, I/ITSEC was held in Orlando, Florida, USA, in early December. The conference includes peer-reviewed paper presentations, workshops, exhibits, a games competition, and STEM events for teachers and secondary students. 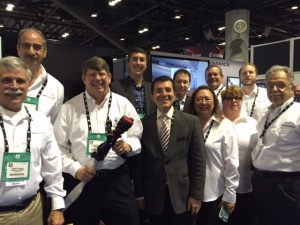