12 May 2016
Warming temperatures in the Arctic are compounding problems for migratory birds.

Migratory birds may face reduced survival rates at one end of their journey, as a result of changing climate at the other end, according to new research.

Scientists from Deakin’s Centre for Integrative Ecology (CIE) collaborated with researchers from around the world to analyse 30 years of data on the populations of migratory wading bird species Red Knots (Calidris canutus).

The birds make the annual 9000km trip from their birthplace in the high-Arctic to their winter home in West Africa.

The research paper, “Body shrinkage due to Arctic warming reduces Red Knot fitness in tropical wintering range,” has been published in the latest edition of “Science.”

The paper presents evidence that reductions in bird body size as a response to climate warming has the potential to cause malnutrition and increase bird mortality rates.

Avian expert and CIE Director Professor Marcel Klaassen worked on the paper with a number of other scientists, including lead author Dr Jan van Gils of the Royal Netherlands Institute for Sea Research, and fellow Deakin researcher Simeon Lisovski.

Professor Klaassen noted that the study shows that Red Knots, which are experiencing “globally unrivalled” warming rates at their Arctic breeding grounds, produce smaller offspring with shorter bills during summers with early snowmelt.

“That global warming is more noticeable in the Arctic is well known, as is the phenomenon of ‘Arctic shrinkage,’ where animals’ bodies become smaller in response to warmer temperatures,” Prof Klaassen says.

“However, when we analysed the data collected on Red Knots over the past 30 years, including satellite images and evidence of changing diets, body sizes and population decline, we discovered that the consequences of climate change at the breeding grounds is affecting survival rates at the tropical wintering grounds.

“Shorter-billed individuals have higher mortality rates associated with them eating fewer of their preferred deeply buried bivalve prey and more of shallowly buried seagrass rhizomes which don’t deliver all the nutrients they need.”

The research unfolded when Dr Jan van Gils visited CIE as a guest researcher during the summer of 2013-14.

“We knew that populations were declining. We knew from the legions of volunteers who have counted and measured the birds on their route from the Arctic to West Africa that their numbers are declining and their bodies and bills are becoming smaller,” Prof Klaassen explained.

“We also knew from isotope data that the birds’ diets were changing and we were able to tell from analysing other datasets that there are more small billed animals born when the snow melt in the Arctic is early because of warmer temperatures.

“It began to make sense that bill lengths may be a factor in declining populations. When we looked at all the different data, the answers started to fall into place like puzzle pieces.”

Combined with the massive decline in migratory bird populations, due to habitat degradation along their flyways (caused by development and pollution), the team’s discovery is not good news for Red Knots. It may also have implications for other species of shorebirds on different migratory routes.

“Populations of Arctic breeding shorebirds are in massive decline and the number of species being added to the critically endangered list is ever increasing,” Prof Klaassen said.

“Wide scale habitat destruction was thought to be the major cause, but now we know that shorter bill length, causing malnutrition and increased mortality, is also contributing.” 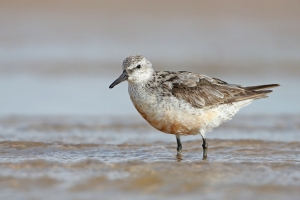