Helping to produce anti-viral COVID-19 facemasks for local and international markets during a global pandemic would never have entered the mind of mechanical engineer Mitchell Moore when he began his career in mining 35 years ago. From mining, to aluminium smelting, to advanced manufacturing, his story parallels Australia’s industrial transformation over the past three decades.

After working in various parts of Australia and overseas, Moore was overjoyed to find a job close to home when he was offered a job as process engineer by the innovative textile technology company HeiQ in 2017, just as the enterprise was building up its Australian operations.

Working with CEO Dr Murray Height, he helped to oversee HeiQ’s establishment at ManuFutures and the two were the first to move into the building in early 2018.

ManuFutures and advanced manufacturing are worlds away from the heavy machinery and often remote locations of Moore’s previous jobs. Twenty years in mining took him to Western Australia, the Northern Territory, Tasmania and back to Victoria to the Stawell gold mine, and then Alcoa’s Point Henry smelter.

“Working at ManuFutures is totally different to my previous jobs,” he said. “It has opened my eyes to a whole lot of business ideas I would never have considered, and being close to home is fantastic.”

Moore loves the variety of “doing a bit of everything” at HeiQ. He works closely with Deakin researchers, helping in the development and scale-up of novel materials that underpin the business. One such technology co-developed by Deakin researchers and HeiQ are Short Polymer Fibre materials, microscale fibres that offer novel properties for various textile applications. HeiQ’s Swiss-based parent company, HeiQ Materials AG, operates six business units around the world and supplies innovative textile treatment technologies to over 200 international textile and apparel brands.

The company has pivoted during the COVID-19 pandemic. Working with Deakin researchers, it has helped in the production of hundreds of litres of hand sanitiser for Geelong front line workers, including police and firefighters.

HeiQ Australia is also part of HeiQ’s global efforts behind the HeiQ Viroblock, a technology which provides textiles, including those used in face masks, with anti-viral and anti-bacterial properties. In addition to HeiQ’s manufacturing facilities in Europe and USA, the HeiQ Viroblock product is also being manufactured in Victoria, with many tonnes already exported to customers in Asia.

“It’s been really satisfying to be able to help out during the pandemic to try and contribute to keeping people safe,” he said. “HeiQ was an amazing opportunity for me, my wife and daughter, allowing us to stay in Geelong, which has provided a great quality of life for our family.” 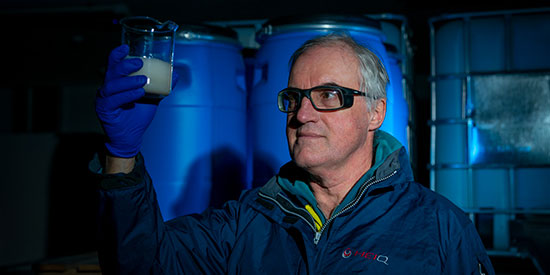