Developed by researchers within Deakin’s Centre for Intelligent Systems Research, the UMS can take users on the ultimate, self-directed simulated journey.

Unlike stationary virtual systems, where the user doesn’t actually move, the gigantic robotic arm of the UMS actually delivers realistic accelerations and manoeuvres at high speeds in any direction, and is able to replicate all the gut wrenching G-forces of a military jet.

But the UMS is no fairground ride. It is the latest in high-tech sophistication that is saving aircraft, defence and automotive industries serious capital.

Since it was commissioned at Deakin in 2010, the UMS has been increasingly used by designers and engineers to test new vehicle designs - long before the innovations ever hit the production line.

Whether it be changes in suspension, centre of gravity, or ergonomics, the UMS can test virtual vehicle or aircraft prototypes under any conditions, from stormy weather, to rough terrain, to engine failure – with specific scenarios programmed into its computer software system.

The accuracy is formidable - enabling simulation of even the most unusual vehicle motions, like the large tilt angles found in rugged terrain, or the slipping or rollover scenarios of a tank in the desert - all in a controlled, safe and low-cost environment at Deakin.

Apart from design modifications, the UMS is also being used to train aircraft pilots through either fixed wing or helicopter aircraft simulations.

According to Deakin’s lead UMS engineer, Dr Kyle Nelson, the highly-customised industrial robot that forms the basis of the UMS system offers a far greater range of motion, flexibility and degree of realism than the previous generation of “Stewart platform”-based simulators.

“The UMS brings together technologies, such as haptics (touch), robotics motion control and virtual prototyping to create the ultimate simulation,” Dr Nelson said.

“The haptic vehicle controls, including cyclics, collectives, pedals and steering wheels, provide realistic sensations, while the high-resolution 3D head-mounted display and 36-camera motion capture and tracking system help to give a sense of complete immersion within the simulated environment.”

"The UMS is the first system of its kind in Australia and this research has been achieved through the support of the Australian Research Council," said CISR Director Professor Saeid Nahavandi.

“In fact, the UMS is the first haptically-enabled robot-based motion simulator in the world."

The UMS is being used by a growing number of researchers and industry partners at Deakin. For instance, engineers are currently working to refine the electronic stability control of passenger vehicles.

“Once we load in the specifications of a particular vehicle type, the UMS can create the sensation and types of motion that drivers would experience if they were in the actual vehicle,” Dr Nelson explained.

Deakin researchers are also using the UMS to simulate military vehicles, such as tanks and armoured personnel carriers. They are presently designing replica vehicle cabins that can be fixed to the end of the simulator for both improving armoured vehicle design and training military drivers.

“We can also monitor all the major physical responses of the user, such as heart rate and EEG (brain) activity, which is particularly useful in pilot training and defence research,” added Dr Nelson. 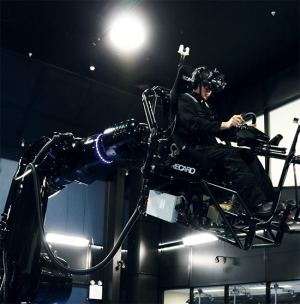 The Universal Motion Simulator can create the 'ultimate simulation.'