Get Up! Stand Up! Show up! – Professor Yin Paradies reflects on this years’ NAIDOC Week theme

Aboriginal and Torres Strait Islander peoples have a proud history of getting up, standing up, and showing up, this years’ NAIDOC Week theme.

While ‘Getting Up, Standing Up, and Showing Up’ can take many forms, for Deakin University’s Alfred Deakin Professor Yin Paradies it means reflecting on our colonial societal structure, and the ramifications of colonisation for Australia’s Indigenous communities.

‘This year’s NAIDOC theme emphasises the need for momentum in systemic change, highlighting reforms and celebration of what has already been achieved,’ says Prof. Paradies

An Aboriginal-Asian-Anglo Australian of the Wakaya people from the Gulf of Carpentaria, Prof. Paradies is Chair in Race Relations at Deakin. His research explores racism and anti-racism theory, Indigenous knowledges and the concept of decolonisation.

‘Colonisation is a key feature of modern societies that has been growing in prominence for the past ten millennia or so,’ he says.

‘Importantly, colonisation impacts all life on Earth, but is particularly damaging to those of us, like Indigenous people, who have radically different cultures.’

Prof. Paradies explains that key aspects of colonisation include debt, private property, institutions enshrined in paternalistic models of care, nation-states, bureaucracy and a “representative” politics of contest, persuasion and spectacle.

‘I feel that there is a vast emptiness at the heart of many of our lives created by the horrifying conditions that colonialism has created around the globe,’ he says.

He describes decolonisation as ‘the process of fostering mutuality of becoming and embodied kinship with all life through transformed ways of knowing, being and doing; grounded in wisdom, humility, respect, generosity, down-shifted collective sufficiency, voluntary simplicity, frugality, direct participation and radical localisation.’

Indigenous Australians continue to be worse off across a number of social indicators like health and education, and the disproportionate incarceration of Indigenous Australians is an important human rights issue. NAIDOC Week and National Reconciliation Week (held annually in May), are opportunities to reflect on issues facing First Nations communities and to drive change.

NAIDOC stands for National Aborigines and Islanders Day Observance Committee, which can be traced to the emergence of Aboriginal groups in the 1920s that sought to increase awareness in the wider community of the status and treatment of Aboriginal and Torres Strait Islander peoples.

National NAIDOC Week celebrations are held across Australia in the first week of July each year to celebrate and recognise the history, culture and achievements of Aboriginal and Torres Strait Islander peoples. It is an important time to discuss important issues, which according to organisers include seeking proper environmental, cultural and heritage protections, Constitutional change, a comprehensive process of truth-telling, working towards treaties, and calling out racism.

This year, NAIDOC Week organisers say ‘enough is enough’, and are calling for real change beyond acknowledgement and good intentions.

‘The phrase ‘enough is enough’ is used in relation to the dilemma of ‘empty words and promises’, says Prof. Paradies.

‘In my view, reform will not address this issue. Only radical transformation will suffice to achieve any kind of healing, justice and freedom for both Aboriginal and Torres Strait Islander and non‑Indigenous peoples.’

Later this year, Prof. Paradies will lead an online gathering to explore cultural difference, Western culture, colonisation, modern societies and Indigenous worldviews, perspectives and philosophies from around the world. It is free to attend and includes presentations, interactive exercises and general questions and discussion.

Register now for the online event. 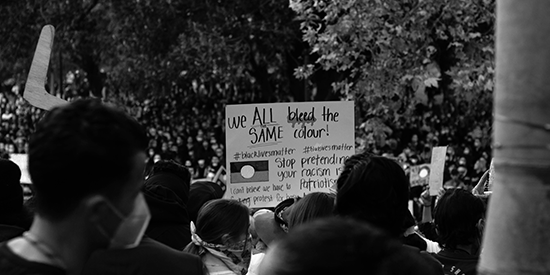 National NAIDOC Week celebrations are held across Australia in the first week of July each year to celebrate and recognise the history, culture and achievements of Aboriginal and Torres Strait Islander peoples.