23 May 2016
A collaboration between Deakin and Barwon Health has led to an innovative tech company with a sophisticated new app.

Born out of collaboration between Deakin University’s Centre for Pattern Recognition and Data Analytics (PRaDA) and Barwon Health, an innovative tech company is gearing up for commercial release of its first product.

iHosp, an app that allows hospital administrators and clinicians to see at a glance what’s happening in the hospital, on the ward or to their patients, was developed over several years of research, using machine learning to mine medical and hospital data to provide hospital cost efficiencies and better predictive patient support.

Originally developed from PRaDA’s iHealth Map, iHosp generated such interest that a company was set up to market and distribute it, with PRaDA and Barwon Health as partners.

According to iHosp CEO Farhang Dehzad, the app is currently undergoing a re-design of its user interface and some functions before the company will begin marketing it to a wider audience.

“It’s already attracted the attention of at least one major Melbourne hospital,” he said.

“Currently, we have a live prototype active at Barwon Health, with about ten to thirty users at any one time providing feedback on how we can improve the product and their interaction with it.”

It also has planning tools and can be used at top and middle management and clinician levels.

“At the top level, the hospital CEO and executives can see patient length of stay information and costs. Middle management can use it to access information for bed management and patient flow and clinicians can access patient data from several sources in one place,” Prof Venkatesh said.

The iHosp interface allows hospital staff to view on one screen which patients are in which ward and bed, how long they have been in hospital, who the treating doctor is and any comments made by other staff.

Individual patient information, like admittance and medical history, can also be viewed. Clinicians trialling the app have claimed this allows them to fully prepare for patient consultations more quickly than previously.

“Hospitals can be more efficient and deliver better care to patients with smarter use of data,” said Matthew Macfarlane, Investment Director at Yuuwa Capital, who has come on board with iHosp as commercial adviser.

“A typical hospital has more than a dozen applications running, which makes finding the right information a time consuming task.

“iHosp provides users with a single source to locate data from all those disparate sources in one very user friendly application and delivers an overview of massive volumes of data collected through existing hospital management systems.

“Managers can see where there are issues and work on them immediately, rather than wait a week for the answer.”

In its current form, iHosp is a data reporting tool only, but its developers hope future versions will allow it to be a predictive tool that can analyse risk.

“This is a great example of collaboration between universities and other sectors leading to the commercial application of research,” Prof Venkatesh said. 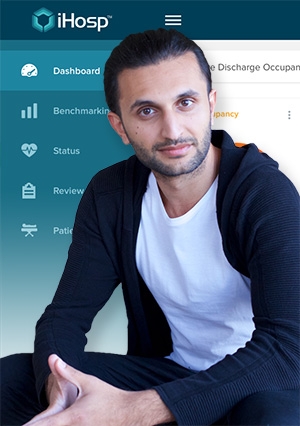