Professor Jane Speight has spoken on the benefits and issues of islet cell transplantation at the world's leading diabetes conference.

The transplantation of clusters of islet cells from a donor pancreas is offering an effective and minimally invasive procedure for people with type 1 diabetes – eliminating severe hypoglycaemia (very low blood glucose), and often reducing the need for daily insulin injections and improving quality of life.

Taking account of the psychological factors experienced by people with type 1 diabetes and finding ways to address these would alleviate some of the pre-transplantation stress, claims Deakin researcher Professor Jane Speight, who is Director of the Australian Centre for Behavioural Research in Diabetes (ACBRD).

Professor Speight gave an invited presentation on the psychological aspects of islet transplantation, in comparison to the more invasive and more common pancreas transplantation, at the 77th Scientific Sessions of the American Diabetes Association in San Diego, California.

With over 200 sessions over a five-day period, the event is the world’s largest and most influential diabetes conference. It was attended by more than 15,000 physicians, scientists and health care professionals from more than 110 countries.

Her findings were generated in collaboration with the UK Islet Transplant Consortium, chaired by Professor James Shaw (Newcastle University, UK), involving clinical teams at six centres across the UK. The Consortium is the first National Health Service program funded as an established clinical intervention for preventing severe hypoglycaemia. Since 2008, 107 people have received islet transplants, and around 30 people are now receiving transplants each year through the consortium’s work.

The procedure is also available in Australia, although the numbers are much smaller here, with approximately 20 people having received islet transplants.

“Overall, people receiving islet transplants in the UK were very satisfied after the surgery and reported its positive impact on their life, due to reduced hypoglycaemia and fear of hypoglycaemia, translating to greater spontaneity and independence in many areas of their lives, with real benefits for their quality of life,” said Professor Speight.

“Being on the waiting list for a transplant is a stressful time, as people have to live with the uncertainty of when they will receive the phone call that a donor has been identified, how the side effects of anti-rejection medications will affect them, and if the surgery will be successful. Also, they often have to manage their family’s positive expectations and temper their enthusiasm for the procedure.”

The disadvantages of islet transplantation include short-term pain, side effects of anti-rejection medications, and depressed mood if the procedure is unsuccessful. Approximately 15 per cent lose graft function in the first six months.

Professor Speight reported: “Benefits are realised for most, at least in the short-term, particularly through increased confidence as a result of freedom from hypoglycaemia and regained glycaemic control. This helps to temper disappointment for those who continue to be reliant on insulin. Weighing everything up, most people report they have ‘no regrets’ about ‘going for it’.”

The ACBRD is a partnership for better health between Deakin University and Diabetes Victoria. It is the world’s first national research centre dedicated to the behavioural, psychological and social aspects of diabetes.

Diabetes affects around 1.7 million Australians, of whom about 10 per cent have type 1 diabetes. Of those, about 5-10 per cent experience recurrent severe hypoglycaemia and impaired awareness of their hypoglycaemic symptoms to such an extent that they would consider an islet cell transplantation.

The ACBRD conducts a broad range of research, and is also spearheading research into diabetes-related stigma, and advocating to improve the language used when communicating with and about people with diabetes.

“We were delighted to see two prominent sessions on these topics at this conference for the first time – marking an important step forward for our discipline, and highlighting the far-reaching impact of the ACBRD’s work,” said Professor Speight. 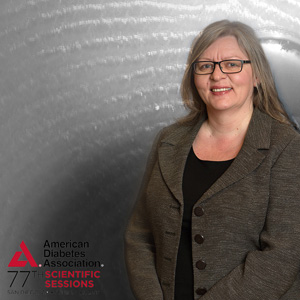