Life on Mars? OzBot may help NASA find out

A Deakin University-designed robot may be heading for NASA’s Mars exploration program, thanks to a deal with NASA’s Jet Propulsion Laboratory.

Deakin's OzBot robot – first developed about 15 years ago for use in law enforcement – is preparing for a giant step forward, after being ordered by the NASA Jet Propulsion Laboratory.

The unstructured terrain that participating teams will need their robots to overcome has many similarities to the Lunar and Martian landscape, with rubble, rocks, dust and remoteness. Powered by a track system similar to a tank, OzBot has a long history serving law enforcement agencies to perform complex operations within challenging environments.

Dr Mick Fielding, Principal Research and Development Fellow and chief engineer of the project at Deakin’s Institute for Intelligent Systems Research and Innovation (IISRI), worked with commercialisation partner and robotics specialist BIA5 to finesse OzBot All Terrain Robot (ATR). He and the development team are very excited for the future of this Australian-developed technology.

"It's fantastic that something we’ve created locally has piqued the interest of the most eminent space exploration laboratory in the world," said Dr Fielding.

"Since the early days of human spaceflight, NASA and the Jet Propulsion Laboratory (JPL) have been achieving incredible feats. Hopefully, we can play a small part in this tradition of exploration."

Among a long list of notable accomplishments, NASA JPL built Sojourner, the first rover to land on Mars, as well as Voyager 2, which has travelled over 17 billion kilometres from Earth and, to this day, continues to send back scientific data.

Over the coming decade, Dr Fielding believes that international efforts to establish a lunar outpost will grow. He explained that much of the initial effort establishing lunar infrastructure will be conducted robotically, creating a need for highly reliable and versatile robotic platforms.

"OzBot ATR is already the toughest and most capable platform in its class and, with some modifications, will be the perfect candidate for exploring the challenging lunar terrain," he said.

"A presence on the Moon will support science missions, trial and validate new space technologies, and likely serve as a staging area for upcoming Mars missions."

The Australian team, led by CSIRO’s Data61, has multiple OzBot platforms on their side. The OzBot ATR is a highly adaptable platform which allowed the Data61 AI payload to be bolted on and pass commands to the robot. The combination resulted in a very clever computer "brain", on a very capable robot.

"The unique benefit of OzBot ATR is that it can traverse terrain that is far beyond the limits of other ground robots," said Dr Fielding.

"A lot of effort has been made to improve the capability of AI systems. The benefits of capable AI become exponential when paired with world-leading hardware, and there is nothing that can match OzBot ATR in its class."

In regards to the competition between Australia and the USA, he notes "the end goal of the competition is to advance the technology and expertise of all participants. We are proud to have our technology represented by multiple teams. We wish all teams luck, and may the best team win".

Shawn Tansley, BIA5 Managing Director, said he was excited to be expanding his business and capabilities in the international market.

"We have four staff currently, but hope to increase that to six within 12 months, along with increasing our Australian-based supply chain for both mechanical and electronic systems engineering and integration of locally-manufactured commercial off-the-shelf componentry," Mr Tansley said.

"Together with the IISRI team, we hope that this is the beginning of a strong working relationship between OzBot ATR and NASA JPL."

The second phase of the DARPA competition, the Urban Circuit, will take place in Washington, USA on Feb 18-27. 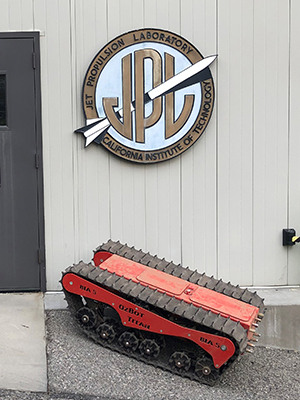 The AI dilemma: can we trust robots?

Can you imagine a future where a robot or other autonomous system works beside you, knowing you so well it can suggest the best product for your needs?