With a large inflated globe in one hand and tee shirt giveaways in the other, climate scientist and Nobel Peace Prize Co-recipient Dr Russell Schnell has painted a concerning picture of the challenges facing the planet due to the rise of greenhouse gases in the atmosphere.

Dr Schnell was presenting a lecture at the Waurn Ponds campus, hosted by Deakin University’s Centre for Integrative Ecology (CIE).

The lecture was entitled "The air we breathe; it’s not what it used to be" and lived up to Dr Schnell’s reputation for clearly explaining complex issues.

With access to the world’s most comprehensive set of atmospheric records, Dr Schnell is the Deputy Director of the Global Monitoring Division, Earth System Research Laboratory at the National Oceanic and Atmospheric Administration (NOAA).

The division has been sampling air for the past 56 years and now has a network of atmosphere baseline observatories over most of the world, with around 20,000 flasks being transported around the Earth at any one time.

Dr Schnell was awarded the Nobel Peace Prize as a member of the "Intergovernmental Panel on Climate Change," the world’s leading international body for the assessment of climate change, which shared the 2007 prize with former US Vice-President and environmentalist Al Gore.

Professor Marcel Klaassen, Director of the CIE, said the visit by Dr Schnell was a tremendous opportunity for the Deakin community to hear from and meet with one of the world’s leading climate experts.

"Research within CIE focuses on how organisms respond to change, importantly including climate change, and it is straight-out fabulous to learn about the drivers of climate change first hand, from such an eminent scientist on the topic as Russell Schnell," Professor Klaassen said.

In the lecture, Dr Schnell used the globe to illustrate the sensitivity and mobility of the atmosphere.

"If you look at this globe, most of the atmosphere is two of my grey hairs out, or just 10,000 metres thick," he said.

Noting that "we all live in somebody else’s sewer," he observed that Hawaii, as an example, has over 10 pollution storms a year due to wind movements from China across the Pacific Ocean.

His key area of concern was rising energy consumption, which is accelerating growth of CO2 in the atmosphere, and the effect of this on climate and the planet.

“Once it is burned, all coal, oil and natural gas produces three to four times its own weight in carbon dioxide,” he said.

"Each carbon atom in the fuel combines with two oxygen atoms in the air to make CO2. How long does CO2 stay in the atmosphere? Eons."

"Why do we care? The atmosphere is heated from below. The sun comes in, hits the earth and radiates heat out, but this is held there by a blanket of CO2 and methane. If you think about feathers in a feather bed, we’ve added about 50 per cent in the last 300 years, to create an eiderdown."

Another striking statistic is the vast energy consumption of many western countries.

"In terms of energy use, each person in these countries has 100 servants working for them 24 hours a day, making food, transporting goods, like bringing strawberries and watermelon to the US from overseas."

"Asia uses 25 per cent energy per capita, compared to the US, but this is changing fast. As more people experience higher GDPs, energy is becoming cheaper. This has to stabilise at some point. If not, there will be interesting climate effects… We have to start thinking about our grandchildren."

He explained that the other two big greenhouse gases are methane and nitrous oxide, with levels, which were steady for 2000 years, accelerating since the industrial revolution, particularly over the past 30 years.

Despite several theories as to the cause of growing methane levels, such as melting permafrost, Dr Schnell said there was no evidence to support this. Analysis from methane signatures has shown that a large percentage of atmospheric methane is coming from the Amazon basin, where greater rainfall caused by climate change has led to an increase in rotting vegetation.

A further concern is the increased acidity in the oceans, caused by the combination of CO2 and water (creating carbonic acid.)

"The CO2 has to go somewhere. Much of it goes into the oceans, as they are a sink. This change of acidity is causing some plankton and other life to react, with some finding it hard to make their shell under increasingly acidic conditions. It could lead to the collapse of some plankton populations in the oceans."

As far as Australia is concerned, he noted that climate change will bring sea level rise, more intense rain, with flooding in southern Australia, higher storm surges, hotter summer temperatures and drier summers. CSIRO and Australian universities have “predicted all this with very high confidence.” 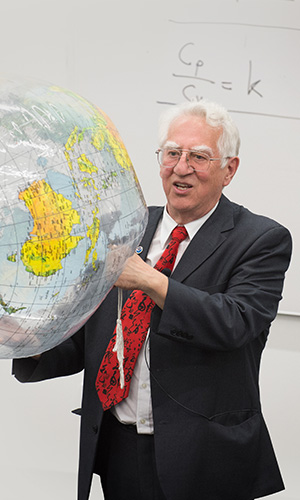 “As more people experience higher GDPs, energy is becoming cheaper. This has to stabilise at some point.. We have to start thinking about our grandchildren.”