One of the biggest stars of Australian comedy, television and radio will visit Geelong this month to help Deakin University celebrate its rising research stars.

Nazeem Hussain, regular panellist on Channel 10’s The Project and the creator and star of SBS Television’s Legally Brown and Channel 7’s Orange Is the New Brown, will appear as Master of Ceremonies at Deakin’s 2022 Three Minute Thesis (3MT) and Visualise Your Thesis (VYT) Grand Final event on Thursday 18 August.

Returning to a live format after two years online, the 3MT/VYT Grand Final is a chance to witness the next generation of research stars wow audiences as they race the clock to explain their research in an easy-to-understand and entertaining way.

3MT gives PhD candidates three minutes to describe their research project without the support of props, while VYT is a pre-recorded audio-visual and multimedia competition that showcases a researcher's project in just 60 seconds.

Alfred Deakin Professor Julie Owens, Deakin’s Deputy Vice-Chancellor Research, says participants are judged on their ability to inform and inspire their audience while clearly explaining the significance and outcomes of their research.

‘In today’s world, it’s vital that researchers know how to communicate complex research to a non-specialist audience in an effective and engaging way.

‘This competition is a great opportunity for our graduate researchers to hone their ability to explain the importance of their work so people can clearly understand the impact it has on solving real problems for our communities and industries,’ Prof. Owens said.

‘As a stand-up comedian, it’s hard enough to make someone laugh at something dumb, so I have complete respect for the participants attempting to engage an audience whilst explaining high-level research and science,’ Mr Hussain said.

Inspired by a Queensland researcher’s three-minute shower timer, 3MT was developed by the University of Queensland in 2008 and is now held at over 900 universities across more than 85 countries. The winner of Deakin’s grand final will receive $3000 and represent the University at the 2022 Virtual Asia-Pacific 3MT competition, with $5,000 up for grabs.

VYT is an international competition established by the University of Melbourne that sees participants use a pre-supplied template to create an engaging visual and digital ‘elevator pitch’ about their research. Deakin’s winner will take home $3000 and compete in the online International Competition Final hosted by the University of Melbourne in September.

The 2021 Deakin 3MT/VYT Grand Final audience was treated to stories about research as varied as using children’s literature to teach marine science concepts to investigating how supermarket prices influence diet to making textiles out of hemp fibres.

The 2022 Deakin 3MT/VYT Grand Final event will see more than 20 participants take to the stage and screen to convince a judging panel of Deakin, industry and media representatives, and a live and online audience, why they should walk away as the winner this year.

Want to join in the fun? Tickets are free and available at http://deakin.edu.au/3MT 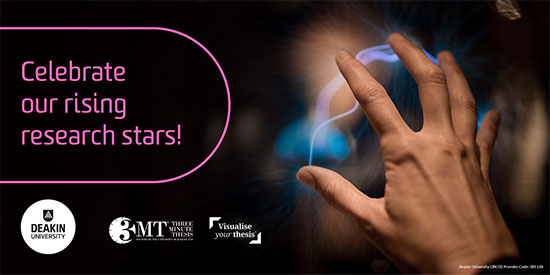