Researchers reveal the role of 'lithium creep' in batteries

Safer and more powerful electric vehicles are one step closer thanks to new Deakin University research. It has pinpointed a crucial mechanism inside lithium-metal batteries that could prevent battery degradation and inform the development of next generation lithium batteries.

In a paper published in the Journal of Power Sources, Institute for Frontier Materials researchers based at the ARC Training Centre for Future Energy Storage Technologies (storEnergy) have revealed for the first time the adverse effect of ‘lithium metal creep’ deformation on the performance of Li-metal pouch cell batteries and their safety.

The research shows how ‘Li creep’, which is the slow deformation of lithium metal, contributes to the degradation of the separator within a Li-metal pouch cell. The separator plays an important role in preventing a short circuit inside a battery.

However, when a separator loses its mechanical integrity, it cannot function as a barrier between the positive and negative electrodes inside the batteries, which can result in battery failure and fire.

‘Batteries based on Li-metal offer the highest specific energy among various battery technologies. However, Li metal is a soft material that deforms easily under pressure, which is described as Li creep,’ lead researcher and senior battery engineer Mojtaba Eftekharnia says.

‘Since Li metal is in contact with a delicate battery component called a separator, Li creep deformation causes mechanical degradation in the separator that eventually results in battery failure.

‘This study shows that current commercial separators are not mechanically compatible with the next generation of high-energy density batteries, and novel battery separators should be developed to meet the mechanical requirements.’

The research discovery comes as electric-powered vehicles surge in popularity in Australia and around the world. In 2022, Tesla overtook Toyota, becoming the brand with Australia’s most popular sedan.

Mr Eftekharnia says the next step in this line of research was a closer investigation of separators.

‘Developing separators that meet the various requirements, including mechanical strength, for battery applications would be an interesting area of research,’ he says.

The ARC Training Centre for Future Energy Storage Technologies (StorEnergy) was created with a $4.4 million grant from the Australian Research Council (ARC) to train and skill the next generation of workers within the energy industry. 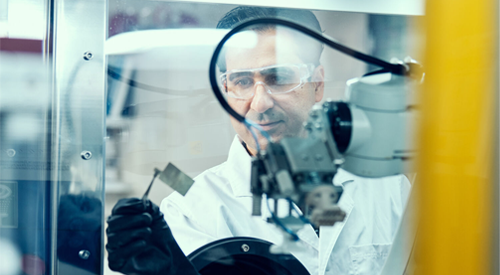 ‘Li creep’ is the slow deformation of lithium metal, which contributes to the degradation of the separator within a Li-metal pouch cell.