Deakin University researchers have mined Reddit posts and discovered that dads’ posting behaviours in the period surrounding their child’s birth can be a warning sign for depression.

‘It’s a huge public health problem that’s not really being addressed,’ says Dr Sam Teague, who was until recently a postdoctoral research fellow at Deakin’s Centre for Social and Early Emotional Development.

Research in this area is also limited. Few researchers focus on dads. Those who do struggle to find dads with time to participate between their work and new family commitments. The small number of men involved in research makes it difficult for researchers to really understand this population.

Dr Teague has an innovative solution: the worldwide online community Reddit. She has analysed thousands of posts on Reddit’s fatherhood forums r/Daddit and r/PreDaddit to better understand what problems dads face and what kind of support they want.

While the thought of researchers riffling through your post history is jarring, Dr Teague says her research team takes privacy very seriously.

‘We comply with strict ethics protocols when analysing social media data. We typically do not look at individual people’s data. We look at higher-level summary data, and use machines to analyse it,’ says Dr Teague.

Researchers are looking for patterns in data. They don’t see anything that can identify individual posters.

Dads commonly post about milestones like pregnancy announcements and activities like paternal bonding, Dr Teague found. But the topic with most users and posts was fatherhood challenges: struggles, budgeting and sleep.

‘One of the things that jumped out was that men tend to prefer sharing informational support with each other. That’s where they share specific advice or information to solve a problem,’ reports Dr Teague.

A user’s post history could also give advance warning of postpartum depression, Dr Teague found. Her machine learning algorithm could predict with close to 70% accuracy which dads would use more language that reflected postpartum depression based on their prepartum posting habits.

‘Impact on social engagement is a key symptom of depression. That’s expressed online through fathers’ posting behaviours,’ she says.

Reddit users were quick to respond to posts about common challenges, like problems in the family environment or broader societal issues. But when posters shared individual challenges like mental health problems, the community was less available to help, Dr Teague found.

The Reddit forums give all fathers a great resource for peer support. Dr Teague wants to create and deliver support that is tailored to those users who need an additional level of professional help.

Based on this research, Dr Teague and her colleagues have designed an app called Rover to help reduce stress, anxiety and depression in fathers with a new baby. Pending results of a recent trial of the app, Dr Teague hopes to make it available to dads everywhere.

‘Rather than expecting men to come to the clinic, we can bring the clinic to them,’ Dr Teague says. ‘I think that’s the future of mental health care: to make it more dynamic and available in the world.’

Learn more about the Centre for Social and Early Emotional Development. 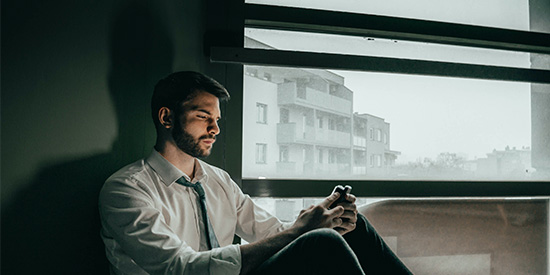 Deakin researchers have mined Reddit posts and discovered that dads’ posting behaviours in the period surrounding their child’s birth can be a warning sign for depression.