15 December 2015
The PRaDA Director has received national recognition in 'The Australian.'

The Director of the Centre for Pattern Recognition and Data Analytics (PRaDA), Professor Svetha Venkatesh, was recognised as a “STEM hero” in a special feature in “The Australian” newspaper last week (11 Dec).

The newspaper recognised 19 Australians who have “emerged as transformers and innovators. Individually, they have uncovered new phenomena and collectively, they represent the discovery and knowledge creation important for Australia to improve its productivity and create the new products, fields and the industries of the future.”

Prof Venkatesh is a Professor of Computer Science, who has been involved in developing new technology that recognises patterns in big data. Her work has led to two start-ups, of which the award-winning iCetana uses video analytics to detect potential security threats in large data sets and is now used around the world.

Other achievements include a health analytics program that is helping doctors predict suicide risk and is currently being trialled with Barwon Health, and which has been spun out to create iHosp, an app that will improve hospital efficiency and patient care and will also be trialled by Barwon Health.

Also noted were a program that is reducing neighbourhood crime and PRaDA’s development of the Toby Playpad app, which is providing therapy for children with autism around the world.

Professor Venkatesh said she was delighted to be included in the list and is excited by the potential for further innovations in her field.

“I think our area of technology will help to transform areas of health and agile manufacturing,” she said.

“An important area that we are moving into at the moment is called lean data, not big data, which is about how we can turn innovations into products very quickly, using experimental processes developed in the lab within advanced manufacturing. For instance, we are now working with (Deakin’s) Dr Alessandra Sutti and HeiQ Australia to produce advanced carbon fibres for use in new types of materials and products.”

Professor Venkatesh also recently delivered the 2015 Harrison Lecture for Innovation, outlining some of PRaDA’s most significant achievements and future directions for the technology. 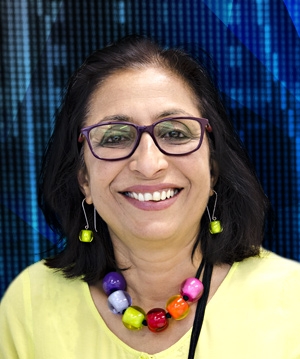