16 May 2016
Marine scientist Dr Peter Macreadie may well be one of the busiest researchers in the country.

When the latest round of Australian Research Council (ARC) Linkage Program funding was announced, Dr Peter Macreadie’s name was on three of the successful Linkage Projects.

In recent months, he has also received the prestigious Melbourne University David Syme Research Prize and undertaken a new project with the Nature Conservancy.

Dr Macreadie, who heads Deakin’s Blue Carbon Lab at the Centre for Integrative Ecology (CIE), says the awards are recognition of the hard work of everyone involved in the various projects.

“I have a great team and an army of people involved in all the grant applications,” he says.

“I think we’re trying to develop a stronger connection between people and nature and an understanding of what nature does for us. It does so much and often comes off second best. We need to change how we manage and value nature in the future.”

Dr Macreadie and his team, including CIE scientists Drs Emily Nicholson and Daniel Ierodiaconou, are involved with a new program, Mapping Ocean Wealth (MOW), a project of the Nature Conservancy that aims to quantify the natural benefits of the ocean to people.

The team will investigate the ocean wealth of Port Phillip, Westernport Bay and coastal areas in New South Wales and their work will map temperate waters for the first time.

“Nature doesn’t issue us with invoices. It gives us stuff for free and we shouldn’t take it for granted,” Dr Macreadie says.

“We know how important the ocean is, but MOW will help translate science into the financial and policy language that might shape changes in the way we evaluate and manage nature.

“The Conservancy’s goal is to describe – in quantitative terms – all that the ocean does for us today, so that we make smarter investments and decisions affecting what the ocean can do for us tomorrow.”

The value of the world’s aquatic environments is also the subject of the three Linkage Projects Dr Macreadie is working on.

He is co-investigator on two Linkage Projects led by other universities and, together with Drs Nicholson andIerodiaconou, will lead the project, "Optimal management of coastal ecosystems for blue carbon sequestration," in collaboration with Professor Catherine Lovelock from The University of Queensland.

The project involves three partner organisations, The Nature Conservancy Australia Trust, Parks Victoria and the Department of Environment, Land, Water and Planning (DELWP), and will develop world-first decision tools to predict how different management plans may affect the ability of coastal ecosystems and their capacity to sequester carbon.

“Coastal blue carbon ecosystems like seagrasses, saltmarshes and mangroves are among Earth’s most efficient carbon sinks, but coastal development and climate change are threatening their capacity to sequester carbon.

“We hope this project can develop knowledge of how to manage blue carbon ecosystems to achieve maximum carbon sequestration capacity and put Australia at the forefront of international efforts to incorporate coastal carbon within carbon dioxide mitigation strategies.”

Dr Macreadie will work with researchers from James Cook University to investigate the implications of a recent discovery of a large area of deep water seagrasses around the Great Barrier Reef.

“Lots of research has been done on shallow seagrasses, but now we’ve found there are over 46,000 square kilometres of deep seagrasses near the Barrier Reef. Now we need to know, are they important? What’s their role?” Dr Macreadie says.

The third Linkage Project, led by Southern Cross University, will investigate methods of restoring inland wetlands without releasing methane and other greenhouse gases.

“Wetlands are among the world’s most efficient ecosystems for carbon sequestration, but methane emission can offset this,” Dr Macreadie explains.

The annual University of Melbourne David Syme Research prize, established in 1904, recognises the best original research in Australia undertaken in the previous two years in biology, physics, chemistry or geology.

Dr Macreadie’s project, “Blue Carbon: A New Weapon Against Climate Change,” explored the bio-sequestration capacity of the ocean’s blue carbon ecosystems and revealed they have the capacity to lock carbon in the ground for millennia, a key mechanism for retiring carbon from the carbon cycle and mitigating climate change.

“However, if blue carbon ecosystems are disturbed, they could leak ancient carbon back into the atmosphere, shifting them from carbon sinks to carbon sources, with major global warming consequences,” Dr Macreadie warns.

He is now researching innovative solutions for minimising blue carbon losses from the ocean and maximising carbon gains. 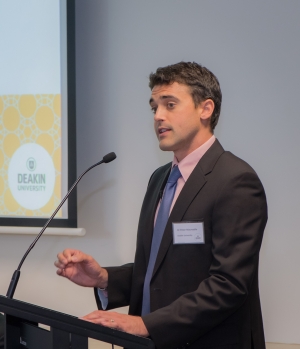