Deakin University’s Professor Kon Mouzakis certainly has pulling power. When he moved to Deakin from Swinburne University of Technology in 2016, the respected academic brought a group of sixteen software engineers along with him.

And while they initially formed the Deakin Software and Technology Innovation Lab, he and his colleagues now make up good chunk of the brainpower behind the Applied Artificial Intelligence Institute (A²I²).

Professor Mouzakis, who is the Co-Director of A²I², said the idea for the Institute began to emerge when he started working with Deakin’s Professor Svetha Venkatesh, an Australian Laureate Fellow with three decades of experience in artificial intelligence.

While she was interested in the fundamental side of research, Professor Mouzakis’ focus was applied research – in other words the practical applications that come from putting fundamental research into play to solve real‑world problems.

Naturally, it made sense to combine those skills, with the pair launching A²I² in 2019. “Bringing these two things together allowed us to have the full width and breath of fundamental research, through to translational, through to a product that people could use, and that’s how it came about,” said Professor Mouzakis, who is based at the Burwood campus.

Much of his attention so far has been on using artificial intelligence to improve the lives of elderly people.

With dementia affecting an estimated 50 million globally, EDIE has been a global success story.

“We’ve got EDIE running in the Czech Republic and it’s also now being translated into German for use in Austria” Professor Mouzakis says.

The Hub, led by Deakin in collaboration with a number of other universities and organisations, is working to develop effective, affordable and safe in-home and in-residential care solutions, such as smartphone technology, to support the mental health of both the elderly and young people.

“We knew that we had to take aged care from the analogue age to the digital age and, hence, why we submitted the proposal,” said Professor Mouzakis.

One of the Hub’s latest success stories is the development of an avatar representing an elderly person known as ‘Ted’.

“The outcome was that the carers were retaining more and they had greater empathy for what the individual who was suffering from dementia was going through.”

The Hub is also trialing integrating technology such as Google Home to help elderly people get reminders for medication or appointments. Sensors are also being trialed to measure when an older person has sat down for too long, or even whether their house is too hot. “We can turn on the air-conditioning for them because in the warmer months, a lot of presentations at hospital by elderly people are associated with dehydration.”

Professor Mouzakis and his colleagues at A²I² – together with their counterparts at The Alfred Hospital - have also built a new version of a Trauma Reception and Resuscitation (TRR®) decision support system initially created by Professor Mouzakis whilst at Swinburne.

The system is designed to help doctors by getting live feeds from a trauma patient’s vital signs, which are flashed up on a large screen in hospital trauma bays.

“We know that they have to make a decision every 72 seconds when a trauma patient arrives at The Alfred Trauma Centre,” said Professor Mouzakis. “We’re saving five to six lives a year by just making sure they remember to perform the interventions – the system triggers the interventions and forces them to respond. Of course, it’s not a mandatory system, it’s a recommendation and they can overrule it at any time.”

A²I² is also working with The Alfred Hospital and The Royal Melbourne Hospital to hopefully use artificial intelligence to help epilepsy sufferers.

“For epileptic seizures the holy grail is: can we actually warn someone a couple of seconds before they have the epileptic seizure that this is going to happen? No one in the world has been able to do this,” said Professor Mouzakis. “This is the gold standard and we’re working with them to try and see what we can come up with.”

Where does the Institute sit globally?

Professor Mouzakis says A²I² is in the top five Artificial Intelligence institutes of its kind in the world.

Visit the A²I² website to find out more about the Institute. 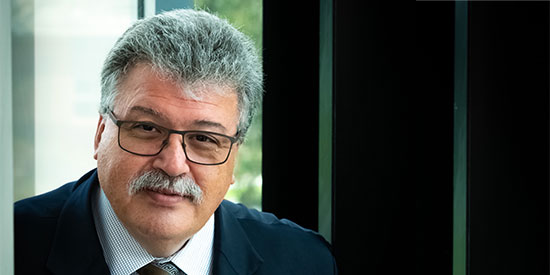