Deakin University PhD candidate, Will King, is on a mission to tell an important story through his confronting and moving virtual reality (VR) film, recently launched at Deakin’s Warrnambool campus.

"The Crossing" is based on the life of Peek Wurrung Elder, Uncle Rob Lowe. Together, Uncle Rob and Will King planned, scripted and produced the film over a period of three years, as part of Mr King's PhD study in Deakin’s School of Education on using virtual reality as a means for truth-telling and reconciliation.

The film focuses on several important moments in the early life of Uncle Rob Lowe and is set on both the Framlingham Reserve and in the Warrnambool of the 1950s and 1960s. This period in Warrnambool's history was characterised by racism, segregation and the oppression and dispossession of Indigenous people. The film highlights these issues to draw attention to the town's recent Indigenous history.

"I first met Uncle Rob Lowe over nine years ago, when he took me on a tour of the local areas," said Mr King, who also teaches history, geography and English at Warrnambool’s Brauer College.

"It was an incredibly transformative moment for me because it was the first time I realised that the town of Warrnambool had a range of stories and histories behind it, and that its vibrant Indigenous history wasn’t one readily written about or acknowledged."

A 360-degree camera was used to film "The Crossing", which is designed to be viewed inside a VR headset. The use of VR allows viewers to become immersed in the recreation of Uncle Rob Lowe's experiences as they watch them.

"I'd done a lot of work with VR technology through my work as a teacher, so I was very aware of the power of being immersed in the experience of a 360-degree reality," Mr King said.

"It seemed like the perfect medium to ensure people came away reflecting on the themes, truths and issues explored in the film."

The creation of the film was led by Uncle Rob Lowe from its inception and he has played a guiding role in all aspects of production and filming. A talented local cast and crew also played a vital role. Community volunteers with backgrounds in theatre, web design, photography and make-up all gave their time willingly to contribute to the important project. However, capturing 360-degree film in rural locations wasn’t without its challenges!

"I felt a really strong commitment to do justice to Uncle Rob’s story, so a lot of work went into finding the right locations to film and prepare those locations to allow the camera, cast and crew access," Mr King said.

"When you make a 360-degree film, every angle is in the shot, so you can't be behind the camera. This means the crew spent a lot of time jumping into bushes and out of sight once the camera was recording."

Launched in late April 2021, the film has already received over 1,800 views on YouTube and received "overwhelming positive feedback" from the local Indigenous and non-Indigenous communities. Along with its initial Warrnambool launch, the film was also screened at a local National Reconciliation Event on May 27 and will be entered in the 2021 Byron Bay International Film Festival, beginning October 15.

Uncle Rob and Will King are also in the process of creating an integrated website where the film and a host of relevant educational resources will reside. While Mr King isn't due to finalise his PhD until late 2022, his research has already uncovered the power and importance of honest storytelling.

"The process has made me realise how important it is to confront people with our Indigenous past, particularly for regional communities such as Warrnambool. I feel sometimes people don't know about – and don't want to know about – the pretty nasty undercurrent of our relatively recent collective history," he said.

"The more research I do, the more I believe that truth-telling is needed. After all, there is no reconciliation until the truth is told."

Mr King’s PhD is supervised by Deakin’s Associate Professor of Education, Julie Lynch, and Senior Lecturer in Education, Dr Glenn Auld. Funding to support the film’s development was provided by leading IT services and solutions providers, Data#3, in partnership with Lenovo.

Watch "The Crossing" in Virtual Reality

Deakin's Warrnambool Library is hosting "The Crossing" in virtual reality between 9am to 5pm, Monday to Friday until the end of June. One person can access the screening at a time, with run time approximately 13 minutes.

Don't live near Warrnambool? You can also watch “The Crossing” on YouTube. 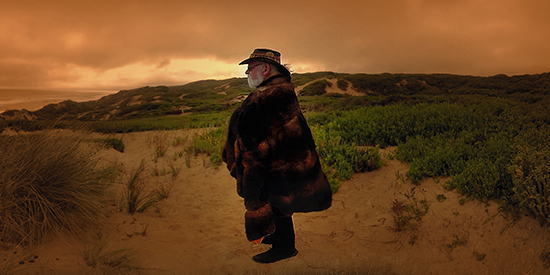