Women running in cities made for men: ending abuse and violence is a marathon effort

The threat of harm deters some women from running in public. They know they are likely to be harassed if they do, explains Deakin University criminologist.

For events like the upcoming Nike Melbourne Marathon Festival, thousands of people need to put in many weeks of training to prepare themselves. Yet for many female runners, the feeling of liberation that running can bring is marred by the ever-present threat of street harassment and violence.

‘Women and girls are routinely having to evaluate what the right amount of panic is, to direct their movements and actions in public spaces.’

The threat of harm deters some women from running in public. They know they are likely to be harassed if they do.

These harms are overwhelmingly perpetrated by men against women. In Australia, the Personal Safety Survey found one in two women (53%) had experienced sexual harassment during their lifetime. That’s more than twice the rate for men (25%).

Women also face real threats to their safety in public spaces from current or former partners. One in six women (17%) – compared to one in 15 men (7%) – have been stalked since the age of 15. And 75% of them were stalked by someone they knew.

The harms can be physical, but they also have emotional, psychological and financial consequences – including the costs of missing work to support health and wellbeing. Globally, the public, private and social cost of violence against women has been estimated at US$1.5 trillion.

Women are participating in running in record numbers in Australia. As with many sport and recreational activities, they commonly use public spaces for running. However, several barriers hinder women’s ability to run safely, including:

In 1967, Katherine Switzer laced up as the first woman to run the Boston Marathon at a time when women were not allowed to compete. Even her coach had resisted the idea, claiming ‘the distance was too long for fragile women to run’.

Since then, the rise of women’s movements has advanced their participation in the public realm generally, but women are still not truly empowered to occupy and run in public spaces.

We are all responsible for making public places safe

Many suggest ‘strategies’ that put the onus of responsibility for women’s safety entirely on them.

Too often, women are encouraged to protect themselves by:

The same precautions are not required of men. In this sense, Simone’s de Beauvoir’s 1949 saying holds true: ‘Humanity is male and man defines woman not in herself, but as relative to him; she is not regarded as an autonomous being.’

Everyone has a role to play in calling out and putting an end to sinister or suspicious behaviours when a woman’s safety is, or may be, compromised. More specifically, it is important that men feel a responsibility to call out harassment and use their platform as beneficiaries of male privilege to make women feel safe and included. For example, they could ask a woman to join a group run if they know she may be running alone.

Local running communities can likewise encourage women’s participation and enhance feelings of safety. In Melbourne, for instance, the FEMMI community brings together recreational female runners on a weekly basis to foster an inclusive and safe environment.

State and local governments also have a responsibility to better integrate women’s voices in the design and planning of public spaces to ensure they are safe and functional for everyone. More targeted community engagement will help achieve this.

This article was written by Dr Mary Iliadis, Senior Lecturer in Criminology from Deakin's School of Humanities and Social Sciences and co-convenor of the Deakin Research into Violence Against Women Hub.

It is republished from The Conversation under a Creative Commons license. Read the original article here. 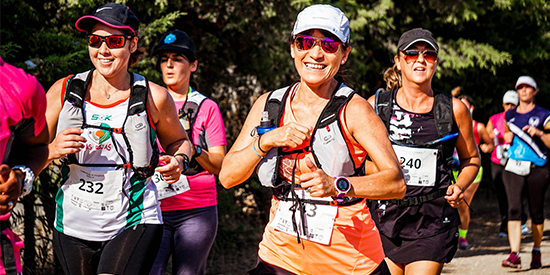 New analysis unpacks the ever-present threat of street harassment and violence that can mar the experiences of female runners.