Research from Deakin’s Institute for Frontier Materials could lead to the development of faster computers and overcome some of the safety issues caused by the overheating of electronic devices such as batteries.

Since their inception, computers and electronic devices have been getting faster and faster, and smaller and smaller. However, if the heat released from small devices like mobile phones and iPads can’t be effectively dissipated, they can overheat, resulting in underperformance, failure or, in extreme cases, explosion.

Current heat dissipation techniques include heat spreaders and heat sinks made from electric-conductive metals such as silver, aluminium and copper. Electrical insulating is also important to prevent short-circuiting when heat spreaders are used directly beneath the active layer in thin, film-based electronic devices like superfast computer processors.

Now, a team of nanotechnology researchers from Deakin University’s Institute for Frontier Materials has produced the first bulk boron nitride (BN) with high thermal conductivity, which could potentially replace current heat dissipation techniques, allow the development of even smaller devices and make our mobile phones and computers cooler and safer.

“In the past few decades, the miniaturisation of electrical circuits in high-end devices, such as next-generation servers, has been hampered by the technical challenge of heat dissipation, which has limited further reductions in size and the development of faster processors,” explained Alfred Deakin Professor Ying (Ian) Chen, Chair in Nanotechnology at Deakin.

“These new BN materials have unprecedentedly high thermal conductivity in all directions and could have a significant impact on current heat dissipation techniques that limit further development of faster computers and lead to safety issues in many electronic devices such as batteries.”

Professor Chen said hexagonal boron nitride had attracted increasing interest as an alternative material for heat spreaders and heat sinks due to its high thermal conductivity and electrical insulating properties.

“However, there were drawbacks to using the material, the main one being that due to its uneven thermal conductivity in different directions, heat couldn’t be transferred from hot spots vertically crossing conventional BN films,” Professor Chen explained.

“Instead, heat spread along the film, which is not efficient.”

“These BN pellets have excellent thermal conductivity and high heat dissipation efﬁciency in three directions, which makes them an ideal heat spreader or insulating heat sink due to efﬁcient heat dissipation from hot spots in both perpendicular and lateral directions. In addition, the pellets are electrically insulating and safer than most metal materials, so they can be placed as close as possible to the hot devices without causing damage” Professor Chen said.

The team’s findings have been patented and published in the high-impact journal Advanced Functional Materials. 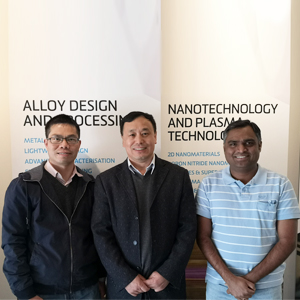