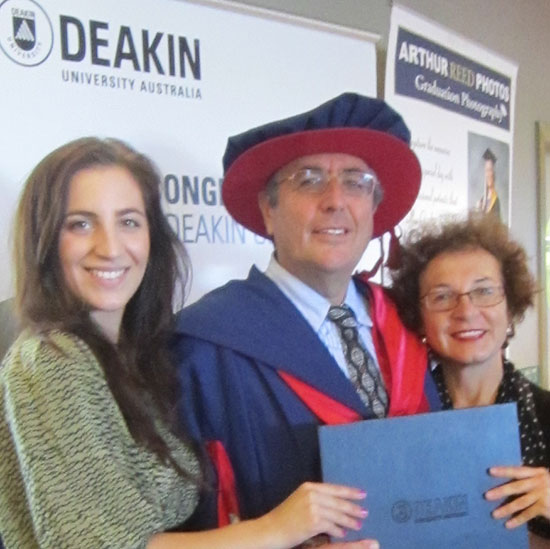 Dr John Basarin OAM is a champion of Turkish-Australian relations, who has educated many about the Turkish perspective of the Gallipoli campaign, through his publications and his leadership of Friends of Gallipoli Inc.. A chance meeting over a cup of coffee led him to pursue a PhD at Deakin.

Dr John Basarin’s interest in the Gallipoli campaign of WWI goes back to his childhood, when his father, who was an officer in the Turkish Army, took him to Gallipoli.

‘He told me that the Republic of Turkey was born there. My strong interest (and later passion) was kindled when I migrated to Australia more than 40 years ago from Turkey,’ says Dr Basarin.

After migrating to Australia, Dr Basarin had a successful career as an engineer, while also co-authoring seven books with his wife Mrs Hatice Basarin OAM and others. These books began with A Turkish View of Gallipoli (1985), and the latest is Gallipoli-The Invasion (2015).

It was a chance encounter that led Dr Basarin to pursue postgraduate studies. He was giving a lecture at the Council of Adult Education and was approached afterwards by Deakin academic, Professor John Hall.

‘Over a cup of coffee, he suggested that he would be very interested for me to undertake a Doctor of Philosophy at Deakin on the topic of Gallipoli with him. The rest is history as they say’, says Dr Basarin.

Dr Basarin began his PhD at the age of 60, completing it five years later. Though there were some challenges throughout the process, working with Professor Hall was a highlight, and a sense of focus and commitment helped him to achieve his academic goals.

‘If one thinks of completing a PhD, as climbing a very tall mountain and then to get to the top, one must take many steps every day, find a way around difficulties, overcome barriers and never ever give up. Persistence I think was the key ingredient’, says Dr Basarin.

Given Dr Basarin’s expertise on the Gallipoli campaign, he has presented widely on the topic in the media as well as in person. Through his role as Chairman of Friends of Gallipoli Inc., he leads tours to Turkey and Gallipoli, and a key element of their work is the commemorative ceremony at Melbourne’s Shrine of Remembrance on 20 December each year. This ceremony remembers the ending of the war at Gallipoli and the coming of peace between Anzac and Turkish forces. This important event has been attended by high profile guests including former Australian Prime Ministers Malcolm Fraser and Julia Gillard.

In 2015, Dr Basarin was acknowledged in the Queen’s Birthday honours list with a Medal of the Order of Australia for service to Australia-Turkey relations, to military history, and the community.

When asked what advice he would give someone starting out in their career, Dr Basarin says: ‘Follow your passion and do not give up.’