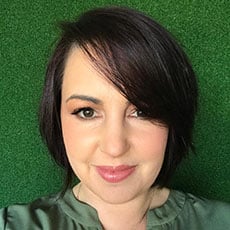 Eleni Hale worked as a journalist for over a decade before turning to media relations and opinion writing. Her first novel, Stone Girl, was released in 2018.

Can you tell us about your time at Deakin? Is there anything you especially remember?
I was in my mid-twenties when I started university. I was excited and enthusiastic to be there – something I noticed was common in older students.

I was fortunate to have some extraordinary lecturers and tutors and who were skilled at encouraging dynamic conversation. This would often spill over into the café where we would argue about politics over coffee.

What has been your journey since finishing your course? Briefly outline your career path prior to your current role.
During my last year at Deakin I gained a position at Channel Nine. I worked as a researcher there for one day a week for about eight months.

Next I packed up my dog and belongings and moved to Wangaratta to take up a position as a cadet journalist.

A few other media jobs followed this before I landed at the Herald Sun where I was a reporter for around five years.

I learn so much during my years as a reporter and decided to try out writing corporate communications next. I worked in federal politics for seven years.

I now teach writing at Deakin University, which is wonderful!

My debut, Stone Girl, won the Readings Book Prize, was shortlisted for the NSW Premier’s Ethel Turner Prize and was longlisted for the Davitt Crime Awards.

It was also chosen for the ADAPTation program through Screen Queensland and Queensland Writer's Centre and is currently in negotiations for a film option.

Stone Girl was shortlisted for the Younger Sun's 2018 Book of the year and was Young Adult Book of the Year by Kids Book Review.

Stone Girl is the story of one girl’s journey through institutional care.

I wanted people to walk in the footsteps of a kid in care. I wanted to show the transformation that occurs when a teenager is responsible for their own survival, the friendships and choices that are made.

From my experience, most creative portraits of kids in care (and those who live without parents) are clichéd. For example, they are the unredeemable character others quickly learn to distrust or pity. Or, parentlessness is used as a vehicle to enhance the reader’s appreciation of some amazing opportunity that befalls that protagonist. Think Harry Potter and Chess Raven. It’s a powerful tool to launch these characters from such a ‘tragic’ start.

Many foster care kids are resilient and strong and creative. I wanted to tell a true-to-life story of life in care. There are currently about 47,000 children and teenagers who live separately from their parents in Australia and we don’t often hear about them. That’s unfortunate, especially for them.

What has been the biggest influence on your career?
Journalism taught me storytelling, structure and minimalist language. I had editors along the way who patiently explained the craft and over time and with much practice this transformed my writing from personal prose to professional text. Most importantly, journalism taught me not to take criticism of my work personally. Constructive criticism is a gift.

Have you always wanted to pursue the kind of career you have embarked on? If so, when and how did you realise?
I’ve been writing for as long as I can remember. While others wondered what they’d do for a job, I was never in doubt. However, it wasn’t until Deakin that I realised my ambition to write novels.

My lecturer at the time, the late Peter Davis, was one of those teachers who understood the power of his profession to open the doors of possibility in a student’s mind. I’d leave his lectures bursting with ideas. I’d jot them down in a notepad as I rushed to my car and drove home to write. He pointed out that one of my essays would make an interesting book. The seed was planted. It took me over a decade but I followed his advice and that essay became Stone Girl.

What advice would you give graduates wanting to pursue a similar profession?
Read ferociously. Like… all the time. It will not only make you a better writer, you will understand the market you’re trying to enter.

Edit your work until it’s ‘perfect’, then edit again. It’s tough to get an agent and publisher to read your work. If you’re a debut then they’re taking a financial risk on you and if your manuscript requires significant work - even if they love the concept - they may not be willing to invest in it. Give yourself the best possible chance.

Also, join a writer’s group or find a team to workshop writing with. I learnt so much from others and made some great friends along the way.

Watch people and truly see your environment. Being observant is critical to good writing.

Get a job where you are out of your depth and the learning curve is steep and then paddle like hell until you’re up to speed. Learn from your mistakes.

A good way to do this is by writing for others not just for yourself. Journalism or communications work is a great way to become disciplined. Joining a writing group and sharing your work is another excellent way to learn and improve.

What do you believe Deakin University has shown you/given you as a person?
My time at Deakin was formative. It taught me critical thinking. It was the first step in building the confidence I required to achieve my career goals.

What are your passions outside your work?
Hanging with my kids, good books, food, ‘fun writing’ and an insatiable appetite for documentaries.

How would someone describe you?
I try not to think about it.

Is there any advice you would give to a person who is starting out in your career?
When I decided to become a journalist I applied for a position at the Leader Newspapers, and a cadetship at News Limited and The Age. All unsuccessful.

My prospects were looking bleak so I moved to the country to get a start. This was a wonderful experience.

When I returned to Melbourne I started searching for leads. I made contact with people who would become valuable sources and I found out about a couple of big stories. I contacted the Herald Sun and sold them the articles. I did this a few times and was soon offered a full time position.

The best advice I can give is don’t let rejection put you off resubmitting your work or applying for jobs. Find another way. As a writer there will be many rejections. And they hurt.

Unless you’re extremely lucky or supremely talented chances are you will be on the receiving end of a large number of cold shoulders.

Take the rejection and keep trying until you figure it out.

What is something that amazes you?
The night sky. My kids. People generally.