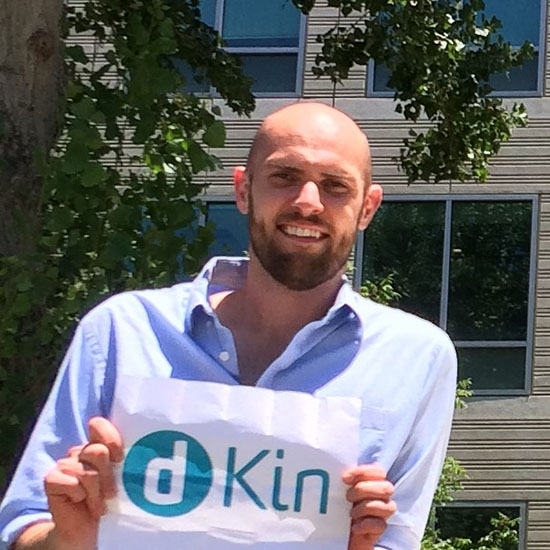 In 2013, Geoffrey McDermott joined an early-stage biotech company with five other Deakin PhD graduates. Five years later, the company has surpassed a valuation of $1 billion. Since then, 10x Genomics has been listed on the Nasdaq Stock Market and grown from 40 to over 500 employees, all sharing the vision of addressing the true complexities of biology and disease.

Studying at Deakin was an absolute blast. We had a little group of about 10 people, and we would spend all day together at lectures then all night studying in the computer labs (or having a few beers down at the Waurn Ponds Hotel). But some of my favourite memories were during my PhD, where I worked alongside my mates all day in the lab and then our supervisor, Prof Neil Barnett, would take us out for dinner at one of the many fancy restaurants in Geelong where we would talk science and philosophy (and wine) into the wee hours of the morning.

After finishing my Graduate Studies, I moved to California to join an early stage biotech start-up called QuantaLife. The company was co-founded by another former Deakin Chemistry Graduate, Ben Hindson, and there were also two other Deakin Chemistry Graduates working there; Chris Hindson and Adam Lowe. After the successful commercialisation of our technology, the company was purchased by Bio-Rad where I spent the next two years.

Working in this large, global corporation I was able to briefly explore life away from the lab bench and take on some minor commercial roles. However, I had been well and truly bitten by the ’tech start-up bug‘ of Silicon Valley, so in 2013 I joined another early stage biotech start-up called 10x Genomics. The company was again co-founded by Ben Hindson and included a cast of other Deakin Chemistry Graduates; Chris Hindson, Adam Lowe, Jessica Terry and Joshua Delaney. Our mission is to build products to interrogate, understand and master biology to advance human health.

Over the last five years we have successfully launched numerous products, acquired two other companies, grown from 40 to over 500 employees and went IPO in September of 2019. Currently, I lead a small group of scientists, working in the early stages of product development and take any opportunity I can to publicly represent our company at events.

There have been two major influences in my career. The first is friends, family and lecturers who have all supported me in various ways along the journey; they have made every career decision feel like the right one. The second is undergoing chemotherapy treatment for cancer in 2013. That experience motivates me every day and drives my passion for being part of amazing teams that build tools to better understand the vast complexities of biology.

Working in industry and moving to America was never part of the original vision I had for my career. I was certain that I would be headed down a path similar to the many other scientists I knew at the time; complete a post-doc in Europe for several years and then head back to Australia for a job in academia. However, now I can’t imagine any other career trajectory. There is nothing more rewarding than being part of a team that builds amazing tools for other researchers to look at their scientific problems from whole new perspectives. When I read ground-breaking research and realise that it wouldn’t be possible without the technology I helped create, it motivates me to continue this industry journey that I have embarked upon.

Never underestimate the power of networking! A good network of professional contacts is as essential to your career as hard work at the bench. There are so many great resources online that provide tips for how to network effectively, so go check them out. Also, don’t forget that social media is a great place to start as you can connect with CEOs from the comfort of your toilet seat! Set up a professional LinkedIn and Twitter account along with making sure you always have a well-polished resume ready.

When looking back, it is incredible just how many threads of both my personal and professional life can be traced back to what my time at Deakin gave me. It is where I forged friendships with classmates who I remain close with to this day. Deakin is where I met my wife during one boozy Oweek celebration. All the connections which led to the fortunate career path I have had, come from Deakin. Finally, the dedication and passion of all my Deakin lecturers helped build and shape my love of science.

Before my twin girls arrived, it was golf, enjoying wine in the sun with my wife or adventuring in the many National Parks of America. However, now my true passions are singing nursery rhymes, piggy back rides and changing diapers!

Translate your passion into hard work and put in 110%! Take on extra responsibilities where you can, don’t be afraid to learn new skills, engage with people outside of your discipline, be a team player and ask for help when you need it.

The complexity of our universe in general – everything from the cosmic coincidence that six numbers in physics are just right for the emergence of galaxies, stars, chemistry and people, to watching two tiny single cells on an ultrasound turn into my beautiful daughters.