Dog wee to the rescue of threatened hooded plovers

Many dread the smell of dog wee, including Australian predators like foxes. Deakin University ecologists are testing the utility of dog urine to protect the nests of a vulnerable shorebird.

Weighing about 100 grams, the small but mighty hooded plover remains an icon of Australia’s beaches.

For over 30 years, researchers from Deakin’s Centre for Integrative Ecology, within the School of Life and Environmental Sciences, in collaboration with BirdLife Australia, have been working to halt their decline.

The species play a critical role in our sandy shore food webs, helping it to function as an ecosystem which provides many benefits, for example keeping beaches clean of excess seaweed.

‘Over the past couple decades, it’s become clear through our work that invasive predators, such as foxes, cause significant trouble for breeding birds.’

The shorebird lays its eggs directly on the beach, meaning flightless chicks are in danger of being trampled or eaten by native predators, wayward dogs and other beach users.

‘There has been a notable decline in [hooded plover] populations numbers since the 1980s, and they’ve officially been listed as a nationally threatened species,’ says A/Prof. Weston.

His research is uncovering new ways to repel foxes from their nests, using the scent of dog urine and commercially available acoustic deterrents which trigger when a predator is nearby.

The project is being trialled on mock shorebird nests before moving onto real nests of hooded plovers.

Mr Saurine hopes this almost intractable problem can be reduced so foxes no longer supress the reproductive success of the shorebird as much as they currently do.

‘My project is based on the idea that dogs represent predators of foxes, and that foxes avoid areas where dogs might be active. By manipulating dog scent in the form of urine, we might be able to repel foxes from sensitive areas such as nesting sites’

A/Prof. Weston said this project in tandem with ‘an army of citizen scientists’ could play a role in reducing the decline of hooded plovers.

‘Coordinated by BirdLife Australia, our citizen scientists are also deploying a range of managements to protect these shorebirds, including symbolic fencing, shelters for chicks and signage,’ said A/Prof. Weston.

‘If successful, these dedicated souls will have another tool to tackle that most difficult problem, the introduced red fox, and its damaging effects.’

‘Even the slightest advantage will help breeding hooded plovers, who don’t need every problem solved for them, they just need and deserve a fair chance at raising their families.’ 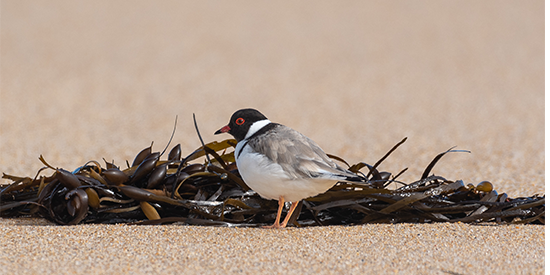