From developing all-terrain robots for potential use on the Moon and Mars with his IISRI team, to developing Deakin University’s CYCLONE centrifuge for training astronauts, Alfred Deakin Professor Saeid Nahavandi has been recognised as Australia’s leading space researcher.

The award was announced on 4 June at the 2021 Space Connect Australian Space Awards, which recognise the leading individuals and businesses driving the development of Australia’s space economy.

In a career spanning more than 30 years, Professor Nahavandi is globally recognised for his pioneering research into intelligent robotic and haptic systems, with many of his modelling and simulation technologies used in civilian and defence applications.

Professor Nahavandi is both Pro Vice-Chancellor (Defence Technologies) and Director of the Institute for Intelligent Systems Research and Innovation (IISRI) at Deakin. He was elected a Fellow of Australia’s top STEM academy, The Australian Academy of Technology and Engineering, in 2019.

“Deakin is delighted that Professor Nahavandi has received this accolade. It is testament to his many years of leadership, passion and collaboration at the forefront of intelligent systems research and innovation,” Professor Martin said.

“The work of Professor Nahavandi and this team places Deakin, particularly through IISRI and several other research Institutes and Centres, in a leading position to help drive Australia’s growing and exciting space industry and contribute to new jobs and opportunities in a rapidly evolving high-tech sector of the Australian economy.”

Professor Nahavandi said he was delighted to be involved in Australia’s burgeoning space industry. Thanks to a budding space program, geography and well-resourced education and research sectors, Australia is becoming a leader in the space market. Its space economy reached over $5 billion in 2018/19 and is expected to reach $12 billion by 2030.

“It is very exciting to contribute to Australia’s space capability,” Professor Nahavandi said.

“Deakin has a wealth of expertise to contribute to this industry.”

Professor Nahavandi is confident that Australia’s space industry has a strong future, with satellites already underpinning many aspects of our daily lives, such as weather forecasting, emergency management, agriculture, GPS, internet access and online banking, and he believes Australian astronauts will be in space in the not-too-distant future.

Of his recent research achievements, Professor Nahavandi is most proud of pioneering the design, development, evaluation and human(self)-test of an Australian-first, high-G centrifuge prototype, called CYCLONE. This provides G-tolerance training for astronauts in carrying out space exploration tasks, as well as for pilots in handling high-speed aircraft manoeuvrability.

The CYCLONE centrifuge can draw up to 9G with an onset rate of 5G per second, exerting extreme acceleration in both translational and rotational motions. It is a low-cost and safe simulator-based training tool, capable of G-tolerance training and evaluation of psycho-physiological effects of astronauts and pilots under varying gravitational conditions, to mitigate the threat of G-LOC (G-induced loss of consciousness).

“Through an equipped environment to facilitate human performance measurement, we can, for example, use wireless functional near-infrared spectroscopy (fNIR), electroencephalography (EEG), electrocardiogram (ECG), Galvanic Skin Response (GSR), and other wearable sensors and devices to capture and analyse the psycho-physiological responses of CYCLONE users under extreme acceleration fields,” he said.

As the first short-radius, high G-force training simulator in Australia, CYCLONE has the potential to negate the need for Australian astronauts and scientists to go overseas for their physiological training and performance assessment under high gravity environments, leading to establishment of Australian sovereign capability in space and aerospace science and exploration. 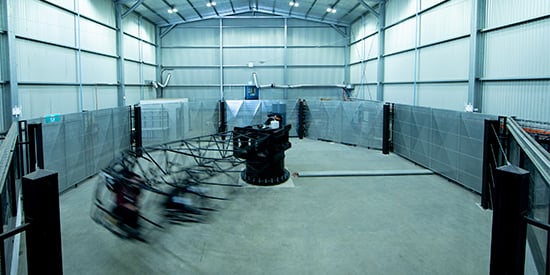 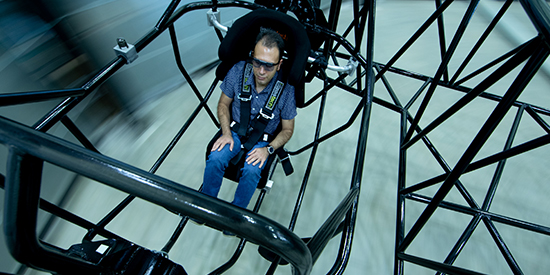 Other IISRI space research projects include: 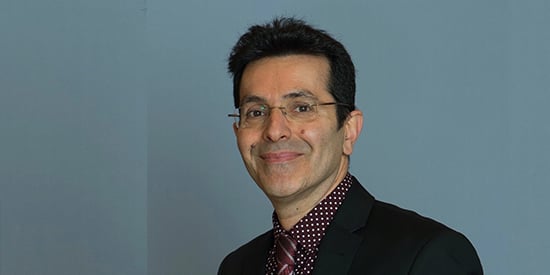