A whiff of history at the Western Treatment Plant

A year in the making, the project is supported by Deakin University, Wyndham City, Melbourne Water, and Wyndham Community Cultural Foundation.

Professor David Cross, Visual Arts Professor at Deakin University and Curator of Treatment, said that the six featured artists spent the past year immersing themselves in the unique space and developing site responses to the technologies, people, histories, landscapes and wildlife at the treatment plant.

“The project offered many tensions that could be explored. In the same way that sewage is transformed into liquid gold (water), ideas have taken form through material processes to become artworks,” explained Professor Cross.

“The Western Treatment Plant has played a key role in Melbourne’s history, yet it is largely unknown to the public – understandably, given its contents and occasional odour, which is now largely under control thanks to a multi-million dollar odour control facility.

“Treatment invites the public in to respect and enjoy this hidden part of our heritage.”

Professor Cross explained that Treatment aims to support the transformation of perceptions of the Werribee region, which has grown dramatically and is now developing a strong focus on arts and culture.

“One of the benefits of placing art in a public space is that it engages artists in the rich complexities of the world we live in. Public art speaks to the world as it is, instead of being located in a ‘white cube’ or sterile gallery space. It also draws a bigger and broader church of people to contemporary art,” Professor Cross said.

The site’s heritage includes the abandoned former township of Cocoroc, which has caught the attention of theproject’s artists.

Once a thriving country town home to over 700 farm workers and their families at its peak in the 1950s, technological advances and improved transport options saw residents drift away until the township closed down in the early 1970s.

For artist Shane McGrath, the old pavilion on the Cocoroc football oval offered a tantalising glimpse of a bygone era.

“The oval was home to the mighty Metro Farm Herefords from 1919 until the team folded in 1964,” Mr McGrath explained.

“The Herefords had perhaps the most peculiar home team advantage in Australia – a bracing aroma from the sewerage treatment plant that was certain to turn a three-quarter time deficit back their way.”

McGrath’s work, On the Outer, sees the Metro Farm Herefords resurrected for two history-making games and is being funded via a Pozible campaign.

He has tracked down former Herefords players, reproduced the distinctive cream and red knit guernsey, re-recorded the team song, and will do an artistic re-enactment of a coach’s address in the clubrooms.

After each game, a rousing chorus of the Herefords’ team song will resonate in the Metro Farm changing rooms for the first time in 50 years.

Professor Cross explained that before the invention of motorised agricultural machinery, the fields surrounding the oval also doubled as a drying facility for the raw sewage.

“Not only did this make for a lush surface, it also provided a regular and unusual bounty for the workers as they searched for valuables that had been accidentally flushed,” Professor Cross said.

“Rumour has it, the women of Cocoroc had some of the finest – and presumably, the most forensically scrubbed – jewellery collections in the city.”

Artist Techa Noble plays on this quirky anecdote in her work, a performance piece that will take place on the current lagoon treatment system.

“I’ll be costuming 12 characters that embody the alchemic treatment process by fashioning the journey of poo into gold,” Noble explained.

“An encounter with Werribee offers us a moment of contemplation with our own waste, it’s a landscape that represents a cultural blind spot that we don’t often acknowledge; what happens after the flush? It’s a space where our individual bodies return to one big communal soup.

The question I asked myself was could something sacred and ritualistic be made within such a profane environment.” 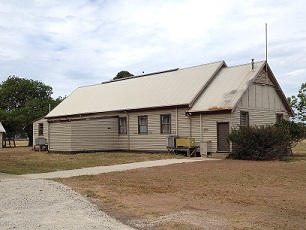 One of the football pavilions at the Cocoroc football oval