C-PAN study helps local students to get 'Up & Learn'

Students at Thornbury High School were part of a world-first study conducted late last year by Deakin University's Centre for Physical Activity and Nutrition Research (C-PAN) into the feasibility of height-adjustable (sit-stand) desks in a secondary school classroom.

These desks allow students to complete their school work while sitting or standing. When in the classroom with the sit-stand desks, students were free to sit or stand during class as they completed tasks such as reading, doing tests or worksheets.

The accelerometer worn by the students showed that on a typical school day, students spent 540 minutes (9 hours) being sedentary across the whole day, 40 minutes being moderately active and 16 minutes being vigorously active.

The unique study, lead by Professor Jo Salmon, Deputy Director of C-PAN, revealed that when the students were in the Up & Learn classroom they sat 16 minutes less and stood 14 minutes more during a lesson compared to the standard classroom.

"We are very excited by these results as previous research has shown that adolescents typically spend more than 70 per cent of their waking hours sitting, with much of this occurring in the classroom.

"Making simple changes to the classroom to reduce prolonged sitting may have substantial effects on young people's learning outcomes and health across their primary and secondary school years," she said.

Professor Salmon said that the findings will help her team of C-PAN researchers to better understand the feasibility of height-adjustable desks in secondary schools and their potential influence on adolescents' physical activity, sitting time and certain cognitive outcomes, such as their ability to solve problems, retain information in their memory and pay attention in class.

The results of the study will now help C-PAN plan for a larger study at other schools this year.

Meredith Stephenson, Assistant Principal at Thornbury High School, said she was thrilled at the response from the students to the Up & Learn study.

"We are very proud that Thornbury High School was part of this important study," she said.

The results of the study will be presented this year in Edinburgh, Scotland at the International Society of Behavioural Nutrition and Physical Activity annual scientific meeting and will be published in an academic journal.

C-PAN's work in physical activity and nutrition is leading the world globally in numerous areas including research into disadvantaged communities, children's health and healthy ageing.

The Up & Learn pilot study was conducted by Deakin University's Centre for Physical Activity and Nutrition Research (C-PAN) with support from the Baker IDI Heart and Diabetes Institute. 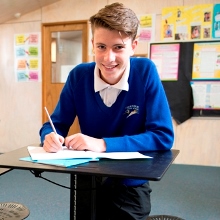 Student Angus Price working on the Sit Stand desks during the Up and Learn study at Thornbury High School.