Deakin University medical scientists have made a breakthrough in prostate cancer treatment, by piggy backing a chemotherapy drug onto a well-known milk protein to create a combination that is lethal for cancer cells without the toxic side-effects.

In a study published in the prestigious international journal Scientific Reports, the scientists with Deakin’s School of Medicine have found that, when coupled with the milk protein lactoferrin, the chemotherapy drug Doxorubicin (Dox) can be delivered directly into the nucleus of prostate cancer cells and will kill them cells as well as drug resistant cancer stem cells, without any side-effects.

Dr Rupinder Kanwar, a senior research fellow with the Deakin Medical School’s Centre for Molecular and Medical Research, explained that doctors had stopped using Dox to treat prostate cancer because of the side-effects.

However the results of this new research suggest that it may soon be possible to reintroduce Dox coupled lactoferrin to the treatment regime – and make it even more effective than before.

“Prostate cancer is one of the few cancers where chemotherapy is not the primary treatment. This is because these particular cancer cells are able to flush out the drug and become resistant to it, while the administered Dox continues to kill off the body’s normal cells resulting in a range of side effects, the most damaging of which is heart failure.

“With this latest study we have shown that by coupling Dox with lactoferrin the cancer cells take in the drug rather than pump it straight out.”

Lactoferrin is an iron-binding protein found in cow milk and human milk. It is known for its immune boosting and antimicrobial properties making it an important part of the body’s protection against infection. It is also added as a key ingredient in baby formula.

It is lactoferrin’s ability as an iron transporting protein to mop up much needed iron for growth of microbes (bacteria and parasites) from the site of infection and its cancer cell killing activities that are exploited by the Deakin scientists to create an anticancer biodrug that has no side-effects and improves the immune system.

Previous work by the team with other types of cancer, funded by the Australia-India Strategic Research Fund (AISRF) to Professor Jagat Kanwar and Dr Kanwar, found that lactoferrin is not digested by the gut enzymes when fully saturated with iron and given as smart nanocapsules.

“This latest study builds on this previous work, whereby to target toxicity and drug resistance, we coupled the Dox with lactoferrin which was then fed to a particular breed of mice that naturally develop prostate cancer. Rather than being pumped out by the cancer cells, Dox was taken to these cells by lactoferrin through its receptors which then stays in the nucleus of the cancer cells to perform its lethal action.

“Within 96 hours all the cancer cells were dead when grown in 3D cancers in a culture dish from drug resistant and cancer stem cells. In feeding experiments, as an added benefit, there was an increase in red blood cells, white blood cells and haemoglobin indicating that the immune system had also been boosted. Interestingly, this combination not only targeted the prostate tumour development in mice, it also led to repair of the Dox induced damage to vital organs including heart and brain.

“Another bonus is that we have shown that it is possible for cancer drugs to be taken orally, meaning it is possible to see a time when patients can be treated at home, rather than in hospital.”

The main goal of the research team now is to move to trials with real patients.

“The results of our research to date show great promise that we could soon develop personalised medication for cancer patients,” Dr Kanwar said.

“Our aim now is to test the cells lines of individual patients. In doing this we believe it could be possible to use these cells to test the effectiveness, dosage and so on of cancer drugs before they are administered to the patients.”

The model used in the study included advanced, metastatic drug resistant castration resistant prostate cancer. Tests were conducted on a particular mouse breed that naturally develops prostate cancer and using 3D cancers in a culture dish from drug resistant and cancer stem cells. The first author, Jayanth Suryanarayanan Shankaranarayanan, is a recent Deakin PhD graduate who is now working as postdoctoral fellow at University of California. 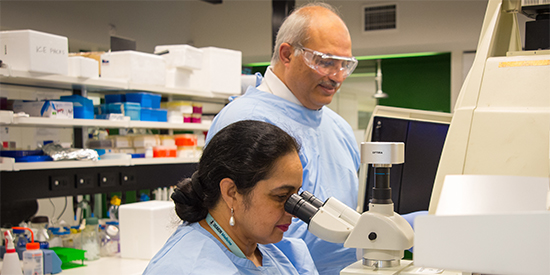