The research, conducted on eight beaches between Point Lonsdale and Anglesea, used GPS trackers attached to dog collars to monitor the threat dogs posed to beach-nesting birds, like the nationally vulnerable Hooded Plover.

Associate Professor Mike Weston from Deakin's Centre for Integrative Ecology in the School of Life and Environmental Sciences said the study showed 70 per cent of dogs being walked at 'on-leash' beaches were actually off the leash.

"We found a high level of complacency about dog behaviour, even on beaches where there had been intensive efforts to improve public awareness about the risk that dogs posed to Hooded Plovers," Associate Professor Weston said.

Hooded Plovers are small, only about 100g in weight, and live their entire life on the beach.

They nest and raise their young on the beach, and suffer from introduced predators, crushing, flooding tides, and attack by dogs.

The study is the first to quantify the amount of space dogs use when they are on the beach and participating dog owners agreed to have their pet's locations recorded by GPS every five seconds.

The research found the dogs travelled up to 33km during their beach visits, running as fast as 19km/hr at times.

Overall, nearly three-quarters of dogs were off the leash regardless of the regulations on the beach they were visiting.

"Australia has high rates of dog ownership and some of the strictest dog-leashing regulations in the world but enforcement appears to be lacking and this results in regulations largely being ignored.

"We need to consider other options to ensure beaches are safe for birds but open to beach goers who enjoy walking their dogs."

Associate Professor Weston said one option was to ban dogs entirely from certain beaches and remove regulations at other beaches so dogs could roam freely at any time of the year.

"Beaches where dogs could roam would need to be places that aren't important sites for native wildlife," Associate Professor Weston said.

"The study did hint at multiple benefits for people who kept their dogs on the leash. The dog owners walked more, there was less impact on wildlife and the owners had fewer unwanted interactions with other dogs and beach users." 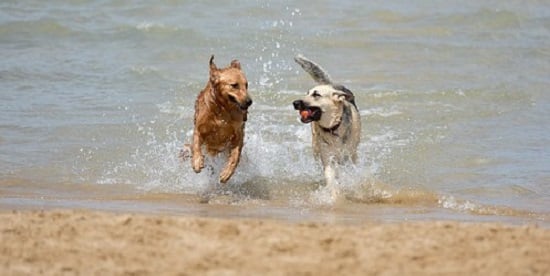