The deadly devil facial tumour disease (DFTD) affecting Tasmanian devils has triggered evolutionary responses in the species which may help them to coexist with the cancer, new research has found.

Researchers from Australia and France reviewed the adaptions Tasmanian devils have been developing over the last 20 years in response to DFTD.

They found that devils have shown evolutionary adaptations and phenotypic plasticity to the cancer epidemic that has decimated populations throughout Tasmania.

The article, 'Oncogenesis as a selective force: Adaptive evolution in the face of a transmissible cancer', was published today in the journal Bioessays.

"The prospects for devils were very grim only a few years ago and the threat of local extinction was real," he said.

"But while hosts and infectious diseases are 'enemies' with opposite interests they must learn to live with each other.

"All the evidence suggests that devils have the capacity to adapt to this transmissible cancer at genetic and phenotypic levels. We have been observing natural selection in action, and this has happened in a very short amount of time."

Dr Beata Ujvari from Deakin University's School of Life and Environmental Sciences has previously shown that devils with elevated levels of certain types of immune molecules have less likelihood of attracting the disease.

Several other studies since from other research groups have shown that the devils' immune system is adapting to combat DFTD.

"For example, active immune responses to DFTD and even tumour regression have recently been observed in several animals, showing a very promising sign that could be exploited for the management of the species," Dr Ujvari said.

"The evidence of devils being able to combat DFTD is great news for managing affected populations.

"The immune signatures observed in devils can be used to improve the genetic management of insurance populations and assist research aimed at developing a vaccine. Future research efforts to fight DFTD will need to focus on the adaptive and natural immune responses from devils to the cancer."

University of Sydney PhD candidate Tracey Russell's research showed that devils have particular attributes, such as mating with multiple mates and choosing the best partner for reproduction, that can help maintain genetic diversity and hence the potential to respond to DFTD in devil populations.

Dr Hamede said that although DFTD-induced extinction is now considered unlikely in the short term, research efforts needed to be maintained towards other threats to devils such as the new transmissible cancer discovered only three years ago, devil facial tumour two (DFT2).

"Understanding how devils and DFTD are evolving side-by-side is very important for predicting the evolutionary dynamics of DFT2," he said.

Co-author Professor Frederic Thomas from the Centre of Ecology and Evolution of Cancer and the National Centre for Scientific Research in France said the research also helped to gain a better understanding of many aspects of human cancer biology and evolution.

The research was supported by the Save the Tasmanian Devil Appeal, Deakin University, University of Tasmania and an International Laboratory Associate project from the National Centre for Scientific Research in France. 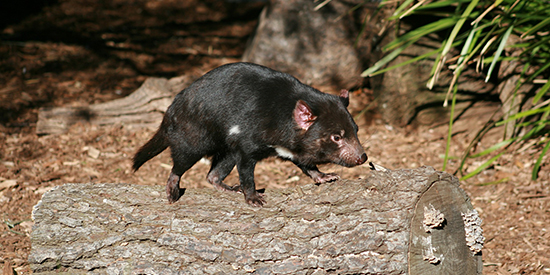