A first-of-its-kind trial encouraging Australians to make healthy choices at the supermarket will be launched today, thanks to a $550,000 grant from the National Health and Medical Research Council.

As part of the 'Eat Well @ IGA' project - a partnership between Deakin University, the City of Greater Bendigo, VicHealth and IGA - seven independent IGA supermarkets in Bendigo and Geelong will take part in a campaign to promote better food choices.

Lead researcher Dr Adrian Cameron, from Deakin's Global Obesity Centre in the School of Health and Social Development, said the participating supermarkets would be closely monitored until March next year, with the effects of the program measured by comparing sales in intervention stores to those at seven other control sites.

"Each intervention store will be decked out with a range of health promoting material, including shelf tags that use the Health Star Rating system to highlight the healthiest items (those rated 4.5 or 5 stars),"Dr Cameron said.

"These stores will also feature custom signage in trolleys and baskets, floor decals, healthy end of aisle displays, flyers, a range of posters and banners, and health promotion training for staff."

This is the first time a comprehensive controlled trial will be carried out in Australian supermarkets, testing new anti-obesity measures like the government's Health Star Rating System, after some individual pilots were completed in Bendigo last year.

"We tested some of these interventions separately last year, without any promotion, and found they were effective in guiding customers toward healthy choices," Dr Cameron said.

"For instance, our shelf tag intervention increased purchases of the promoted products by 12 per cent.

"We want to see if by running this kind of comprehensive trial, which includes a large range of interventions at once, supported by promotion and training, we can make a big difference to how much healthy food is purchased over a sustained period.

"With poor diets the number one disease risk factor in Australia, obesity levels that stubbornly refuse to budge, and related healthcare costing the country billions, this type of project is crucial to preventing chronic diseases like type 2 diabetes and cardiovascular disease.

"The great thing is that everything we're introducing as part of this project is low-cost, scalable and feasible for the retailer, so if we get some positive results we hope it will encourage IGA to continue, and even expand, the program."

Champions IGA CEO Michael Zervakis said the project was a "tremendous opportunity" for the business to help its customers eat well.

"The Champions IGA group of stores are proud to lead the way in being supermarkets that promote healthy eating," Mr Zervakis said.

"Two in three Victorians are overweight or obese, which is why it is crucial we create more environments where healthy food and drinks are easy to find and widely available," Ms Nelson said. 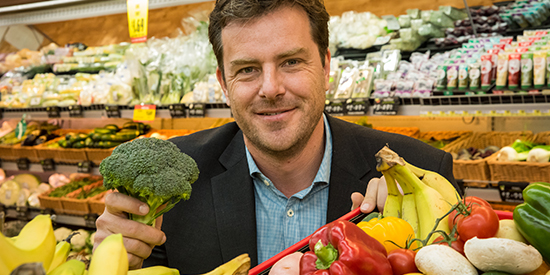