In February, visitors to the National Wool Museum in Geelong will be able to enter the world of Leaellynasaura, a dinosaur that lived in Victoria over 100 million years ago.

The team is working with palaeontologists Professor Patricia Vickers-Rich and Professor Tom Rich to develop an exhibit that will immerse people in the dinosaur's original habitat, allow them to see and feel the dinosaur and also give them access to present-day dinosaur digs.

'Many Australians, including myself until recently, don't know that there were dinosaurs living in Australia in areas as far afield as the Otway Ranges in Victoria and North Queensland. It is hoped that this project will allow people to learn more about them and also change the perception that people have of dinosaurs as carnivorous hunters – Leaellynasaura was a small herbivore.'

'We are exploring how new digital technologies can be used to educate people about things that no longer exists such as dinosaurs and also to experience activities that are difficult to access, such as archaeological digs' says Dr Horan.

‘Our palaeontologist colleagues are providing advice about the environment that these animals lived in and an idea of what they looked like so that the mixed reality experience can be as realistic as possible.’

The 360 degree VR filming eliminates blind spots so scientists and palaeontologists have access to more comprehensive information about the space than they had before. 3D scanning and printing allow the creation of a comprehensive digital record of the fossils and artefacts that are discovered.

‘Mixed reality is very new and we believe that this is the first mixed reality exhibition where 3D printing and virtual reality are used to interact with a dinosaur within its original habitat.’

‘Our goal is to make this experience and information accessible to museum visitors and eventually to those who can’t make it to the museum. Anyone with a 3D printer and VR headset will be able to print their own fossils and access the exhibit online at school, the local library or even at home.’

The exhibit will be at the National Wool Museum in February 2018. 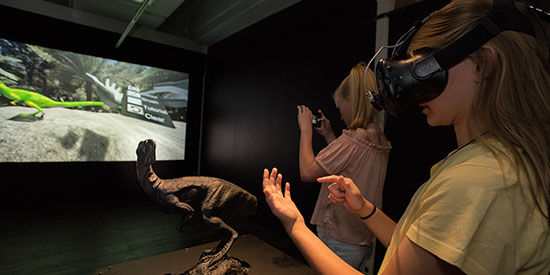