Using a three-dimensional (3D) printer to produce a human blood vessel - or even a kidney -might seem like science fiction, but the era of 3D bioprinting has arrived.

Using a patient’s own cells, scientists can now build up, layer by layer, a body part as complex as a blood vessel or heart valve, in a matter of minutes – and it is expected that they could create organs as complex as livers or kidneys in the future.

Deakin University has recently acquired Victoria’s first commercial 3D bioprinter, and researchers from its Schools of Engineering, Medicine, Exercise and Nutrition Sciences, Life and Environmental Sciences, and its health research centre IMPACT are enthusiastically investigating innovative applications of the technology.

Associate Prof Kouzani - an expert in microsystems engineering - explained that medicine is the latest in a long line of industries to benefit from the 3D printing technology, because the bioprinting offshoot of this technology has enabled automated layer-by-layer placement of biocompatible materials, cells, and other necessary elements into complex 3D tissues.

According to Prof Gibson: “Over the past decade, enhancement in function, reduction in price, and increased simplicity of use have resulted in substantial growth of 3D printing, with numerous domains already using the technology, including manufacturing, architecture, education and defence.”

“Although it is still in its early stages, 3D bioprinting has already produced success in printing different experimental tissues, such as bone and neural and cardiac tissues.

Among a plethora of potential applications, Deakin scientists expect to undertake research relating to breast reconstruction or augmentation, implantable bone, sensors for sport or medical use, and organ biomimicry using a patient’s own cells to investigate tailored responses to commonly administered drugs.

Associate Prof Kouzani explained that the Deakin bioprinter works by extruding biocompatible materials, such as soft hydrogels, polymer melts, ceramics and metals, through small nozzles, whose position and function are precisely controlled.

More importantly, it is capable of printing living cells within a nutrient-containing gel solution that mimics conditions found in the human body.

“The process follows principles derived from tissue engineering, which employs the self-organising properties of cells, and exploits recent advances in micro/nano fabrication technology, to print cells into 3D functional tissues,” he said.

Hurdles still to be overcome include in-vivo compatibility, revascularisation (controlled creation of the vascular system in functional structures), and cost, among others.

“We are now building an interdisciplinary research team that includes representatives from health-related industries. This technology has outstanding potential for Geelong’s healthcare industry and economy in the coming years.” 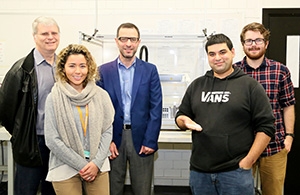 Helping to produce anti-viral COVID-19 facemasks for local and international markets during a global pandemic would never have entered the mind of mechanical engineer Mitchell Moore when he began his career in mining 35 years ago.