After 18 years working as a fitter and turner with Ford Geelong’s product development team, Nigel Petrie took the plunge to set up his own business, “Engineered to Slide,” at ManuFutures in late 2018. He is now close to achieving his goal of manufacturing Electric Motorcycles.

Building up the company to now employ three staff, he has completed the first stage of his three-year business plan. He has developed a high-tech driveline that can replace petrol motorbike engines with electric motors on standard motorbikes. The second stage, developing a prototype for his fully-produced electric motorbike (using a lithium battery), will be completed in early 2021 and is expected to be in production in Geelong by 2022, with at least an extra seven staff.

“Starting out on my own was daunting. I grew up in the country and didn’t go to university, but I had ideas and lots of hands-on experience,” Mr Petrie said. “ManuFutures provided a huge amount of support, including time management strategies, access to grants and a group of really helpful people.

“I don’t think I would have had the confidence to take this path without ManuFutures. I wouldn’t have dreamed of the things I’ve been exposed to here. It has changed my perspective. Issues can become irrelevant quickly because other people have been through them and are happy to share what they’ve learnt. The set-up allows you to speed up the process of taking an idea, turning it into reality and planning for the future.”

“Engineered to Slide’s” electric driveline is currently being assessed by the Federal Government for road safety approval and should enter the market during 2021. It is the most power-dense electronic driveline to be fitted into a motorcycle.

“The system uses several technologies in novel ways, including software that manages the Torque, performance and longevity of the battery. It is small, powerful and intelligent, and it has export potential,” Mr Petrie said.

Petrie is ideally placed to spearhead an Australian electric motorbike production industry. While at Ford, he established a national reputation in motor sport, and he has since developed high-end motorbike concept designs that have been used by BMW and Harley Davidson alike.

“I had my own website, blog, merchandise and ran a motor sport program,” he said. “I always wanted to delve more deeply into this space and ManuFutures offered the opportunity. It offered both business ideas and experts who could provide technical advice, such as the researchers at (Deakin’s battery research facility) BatTri-Hub and carbon fibre experts such as Partington Advanced Engineeering at ManuFutures.

“This is an exciting time and Australia is ready for electric motorbikes. They are better for the environment, Geelong has the technology, know-how and materials to produce them and there is strong interest from the public.” 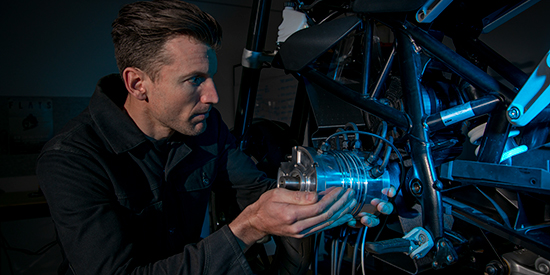 Nigel Petrie from Engineered to Slide

The future is bright for next-generation advanced materials and manufacturing, thanks to a new Centre of Excellence between Deakin and IIT Madras.