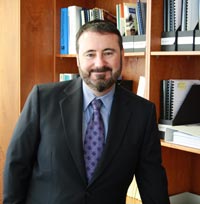 Dr Adam Tomison is internationally recognised as an expert in the prevention of child abuse and family violence, and the development of child protection and family support systems. For over two decades he has worked with a range of government and non-government organisations and advocacy groups in Australia and overseas.

Dr Tomison graduated with a Bachelor of Science (Hons) in 1988 and credits his Deakin experience with helping to kick-start his career in the prevention of violence and other crime. 'Deakin gave me an excellent degree and a professional qualification that has underpinned my subsequent doctoral studies. I've always found Deakin degrees are well-respected by other academic institutions and the broader sector. The analytical skills I developed and the research methods and statistical training I completed there have provided an excellent base for the range of social sciences research and systems design work I have undertaken since leaving university,' he says. 'But it was also the positive engagement I had with academic staff which was key to making my Deakin experience a very rewarding one'.

He became well known for his work developing the National Child Protection Clearinghouse, an internationally-recognised centre for excellence, and the Australian Centre for the Study of Sexual Assault at the Australian Institute of Family Studies. He currently serves as a board member of the International Centre for the Prevention of Crime (Canada). He has also served on the Boards of the International Society for the Prevention of Child Abuse and Neglect, NAPCAN Australia.