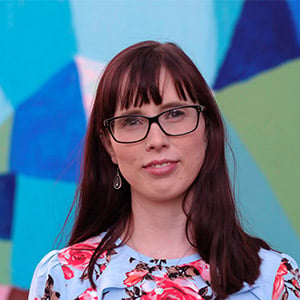 The tutors that I worked with were passionate about the subjects they taught, and made every lesson feel more like a conversation than a lecture. The Deakin online platform made studying from the other side of the country easy.

What has been your journey since finishing your course? Briefly outline your career path prior to your current role.

I was approached by a publisher whom I had met through a writing group I was running at a local Writers’ Centre called The Centre for Stories. This publisher, Margaret River Press, was interested in mentoring writers who had been involved in their short story anthologies over the years, and I had been selected as a potential writer for development. In late 2018, it was announced that Margaret River Press would publish my first collection of short stories, Well-Behaved Women. Since the book was published in December 2019, I have done numerous speaking events at local libraries, and just appeared at the 2020 Perth Writers Festival.

My family. In particular, my Mum and Grandpa, who are the biggest bookworms I know, aside from myself.

Yes! I’ve wanted to write books for as long as I’ve known how to read them. I wrote stories all through school and even formed my own ‘publishing company’ in my bedroom as a 10 or 11-year-old.

Don’t just talk about being a writer. You actually have to sit down and write. Also, don’t be afraid of networking. Join your local writers’ group, go to book launches, buy books, and talk to librarians and booksellers. Be a part of the industry that you want to support you.

My time studying at Deakin University gave me the confidence to take a risk, and put my work out there. It also gave me the knowledge and skill set that I needed to take on freelance work.

I’m a passionate advocate for libraries, I love historical fiction and Australian literature, and I really enjoy knitting and crochet!

Talkative, enthusiastic, and always with her nose in a book.

Find a community. A writers’ centre is a good place to start.